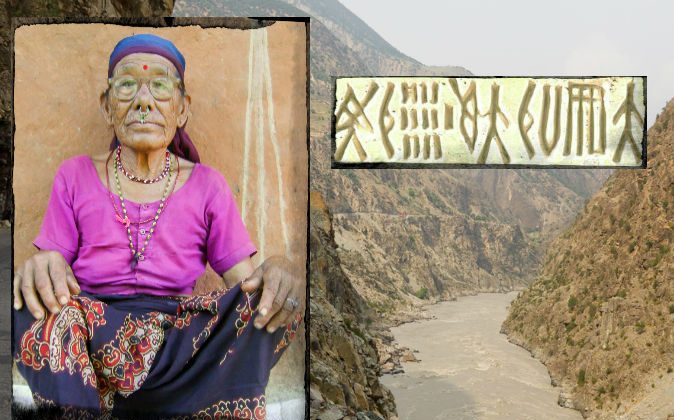 The Mysterious Origins of Some Dead or Dying Languages

Language is said to be the key to understanding a culture—the medium by which the arts and ideas of a people have been passed down over generations. Many languages are dying in the modern world, and linguists strive to mine and save the cultural gems embedded therein.

Did these languages spring up on their own? Did they come from a remote ancestral tongue long lost from the annals of history?

An example of the Indus script. (Sheldon Lee Gosline via Wikimedia Commons)

The undeciphered Indus script has long fascinated and frustrated linguists and archaeologists. Deciphering the symbols would unlock the language of an advanced civilization residing in the Indus Valley, what is now eastern Pakistan and northwest India, 4,000 years ago. This civilization was as advanced as those of the Egyptians and Mesopotamians of the time, and promises a similar wealth of anthropological treasures.

Some contend that it isn’t a language at all, that the “script” is just a bunch of symbols like those found on modern traffic signs, for example. Others say it is an ancient form of Sanskrit or that it has roots similar to the Dravidian language family (related to languages spoken in South India today).

The Egyptian hieroglyphs were deciphered with the help of the Rosetta Stone, a trilingual inscription that provided a point of comparison for the glyphs. No such aid has yet been discovered for the Indus script.

Computer scientist Rajesh Rao of the University of Washington has used computer algorithms where human analysis has fallen short. He ran several languages through a computer program for it to analyze the patterns. Then, he ran passages of the Indus script through to detect any similar patterns.

The computer couldn’t translate the language, but it provided a step in the right direction. It was able to identify potential parts of the spoken language by discerning patterns. For example, in English, there’s a certain frequency and pattern with which the word “and” appears in a passage of text. There are also other contexts in which certain words, such as place names, are likely to be repeated at certain intervals.

“Even though we can’t read it, we can look at the patterns and get the underlying grammatical structure,” Rao told Wired magazine. He also discussed the use of computation in deciphering the ancient script in a 2011 TED Talk shown below.

Glyphs written on wooden tablets found on Easter Island have stumped linguists. It seems the residents of Easter Island may have developed this form of writing only after first encountering Europeans in 1770. Though they may have gotten the idea of writing from the Spaniards, the form bears no resemblance to any known language.

The indigenous people of Easter Island, the Rapanui, were asked by the Spaniards to sign written documents of annexation. Linguist Dr. Steven Roger Fischer, who studied the glyphs over the course of several years, said in a paper titled “Rongorongo: The Easter Island Scripts” that the Rapanui did not seem to have writing before this. The signatures on the Spanish documents seem to be imitations of the European writing rather than an existing indigenous script.

In 1864, Easter Island’s first non-Rapanui resident, Joseph-Eugène Eyraud (1820–1868), was the first to have observed the rongorongo script. It was inscribed on wooden tablets in every home on the island, he said, each with a seemingly sacred significance. A couple years later, nearly all the tablets were gone, he said. Fischer explained that this may have been due to the decimation of the population through smallpoxs and raids to capture slaves.

The language is thought to mix ideographs (in which symbols represent concepts) and a phonetic alphabet. Fischer has suggested that the boards contain creation chants, though some remain skeptical.

Fischer used an unusual staff with rongorongo glyphs as a sort of Rosetta Stone. The staff was inscribed with the only piece of rongorongo text that had been marked into segments by vertical lines. He was able to observe patterns, particularly the inclusion of a phallic symbol at the beginning of each section. He took this to signify “copulated with.”

In his book, “Glyph-Breaker,” Fischer wrote of his discovery: “Easter Island’s rongorongo was speaking again at last … after 128 years of silence.”

19th century Explorer Alexander von Humboldt is said to have found a parrot in Venezuela that echoed the words of its former owner—the last traces of a lost language. The parrot was in the possession of a tribe that had completely vanquished the opposing Ature tribe. With every member of the Ature tribe dead, the victors had taken many spoils, including the pet parrot. Humbolt recorded the words spoken by the parrot, the last traces of the Ature tribe, according to writer and journalist Mark Forsyth in his book “The Etymologicon.” A modern artist has trained parrots to speak the words recorded by Humboldt, perpetuating the strange role of parrots in preserving the language.

Gyani Maiya Sen, 76, poses for a photo at her home in the remote district of Dang in western Nepal, Aug. 13, 2012. As Gyani Maiya Sen nears the end of her life, she worries that her final words may the last ever spoken in her mysterious mother tongue. The 76-year-old, part of a vanishing tribe in remote western Nepal, is the only known surviving speaker of Kusunda (though some linguists say a few more may exist without having been identified), a language of unknown origins and unique sentence structures that has long baffled experts. (STR/AFP/Getty Images)

Linguist David E. Watters of the Tribhuvan University in Nepal estimated in 2005 that there were only 7 or 8 people left who speak the linguistic isolate Kusunda. The language’s history probably predates the arrival of Tibeto-Burman and Indo-Aryan speaking peoples in the sub-Himalayan regions, he wrote in a paper titled “Notes on Kusunda Grammar.”

The last speaker was thought to have died in 1985, until three speakers were discovered in 2004.

Watters worked with these speakers to record all that he could of the dying language. He noted some interesting points of difference between Kusunda and all other languages of the region.

For example, it differs greatly in terms of phonology (how it sounds). Surrounding tribes with hunting-gathering histories like the Kusunda, “are renowned for making minute anatomical distinctions,” Watters said. Kusunda, on the other hand, is strangely lacking such distinctions. The word “gobloq” means both “heart” and “lung,” and the word “tu” means both “snake” and “bug.”

The Kusunda have been forced to intermarry with Nepalis and people from other tribes due to their own dwindling population and diminished forest land for hunting. Given the unique nature of the language, said Watters, “That Kusunda has persisted to the present day is something of a linguistic miracle.”

*Image of the Indus Valley via Shutterstock