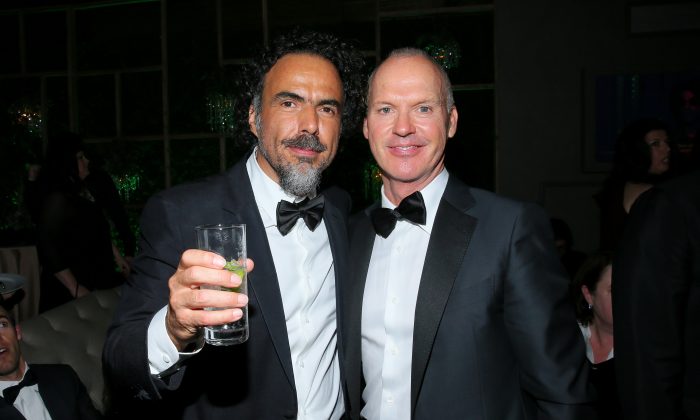 Michael Keaton had one of the most watched Golden Globe acceptance speeches after winning the award for best actor in a motion picture, comedy, or musical.

Keaton starred as a real-life superhero in the film Birdman.

Keaton’s speech drew acclaim because, after thanking director Alejandro González Iñárritu, he talked about his family and growing up.

“In the household in which I was raised, the themes were pretty simple: work hard, don’t quit, be appreciative, be thankful, be grateful, be respectful. Also to never whine, ever. Never complain. And always, for crying out loud, keep a sense of humor,” he said at the awards show, which was on Sunday night.

“My name is Michael John Douglas. I’m from Forrest Grove, Pennsylvania. I’m the seventh child of George and Leona Douglas. And I don’t ever remember a time when my father didn’t work two jobs, when my mother wasn’t saying the rosary or going to Mass or trying to take care of seven kids in a rundown farmhouse as she was volunteering at the Ohio Valley hospital where I was born — in a hallway.”

Keaton then got choked up in his conclusion. “My best friend is kind, intelligent, funny, talented, considerate, thoughtful. Did I say kind?” Keaton said.

“He also — he also happens to be my son, Sean. I love you with all of my heart, buddy. This is for ‘all those people,'” he added. “Sorry, shoot. Two things I said I wasn’t going to do — cry and give air quotes. Damn.”

“I’m so grateful, honestly, from the bottom of my heart,” Keaton concluded. “You have no idea what this means to me. To come from the place where I come from, I’m proud of all of my friends and my family. Thank you very, very much. I’m extremely grateful.”

Michael’s son is Sean Douglas, a music producer who has written a number of songs including Demi Lovato’s Heart Attack.

Keaton had Douglas with his ex-wife Caroline McWilliams, who passed away in 2010. Douglas is Keaton’s real name, as Keaton is his stage name.