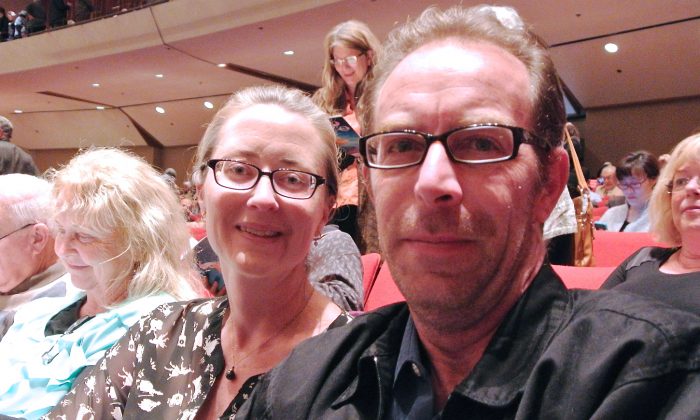 SACRAMENTO, Calif.—For musician Rob Fisher, the unique instrumentation of the music in Shen Yun Performing Arts was an enjoyable bonus.

“I really enjoy it, [the] different instrumentation used in the orchestra setting,” Mr. Fisher said at the Sacramento Community Center Theater, Jan. 15.

New York-based Shen Yun revives 5,000 years of Chinese civilization through the performing arts, with forms like traditional Chinese dance and music that blends East and West.

The Shen Yun Orchestra does what no other orchestra has—successfully blending traditional Chinese instruments into a full Western symphony. Instruments like the pipa, erhu, and suona play alongside violins and trumpets. The suona is a double-reed woodwind that can produce a bright and clear sound.

The two-stringed erhu has a history of nearly 4,000 years and is known for its expressiveness. The pipa, or Chinese lute, is called the king of Chinese folk instruments and is played by plucking the instrument upright on one’s knee.

The construction of the pipa epitomizes ancient Chinese belief, according to Shen Yun’s website: “Its body, by traditional Chinese measurement, is three feet five inches, representing the three powers—heaven, the earth, and man, and the five elements—metal, wood, water, fire, and earth.”

Shen Yun uses this mix of instruments to play original compositions. Because some of the dances are folk dances of different ethnic peoples, the compositions show great range.

“I enjoyed the compositions, the regional points of view,” Mr. Fisher said.

“The music was beautiful,” Ms. Ashabran said. “It was peaceful to me. Because of the music, it was all very peaceful.” She said that while watching the performance, she felt as if she were in a Chinese temple.

Mr. Wierich said he enjoyed the energy of the performance and was glad to have the opportunity to see the art of traditional Chinese culture.

The two enjoyed the stories told through Shen Yun as well and were appreciative of Shen Yun’s mission to revive the traditional culture.

“It’s probably been done for thousands of years, so it’s nice to be able to tap into it,” Mr. Wierich said.

“The story for each dance was beautiful,” Ms. Ashabran said.