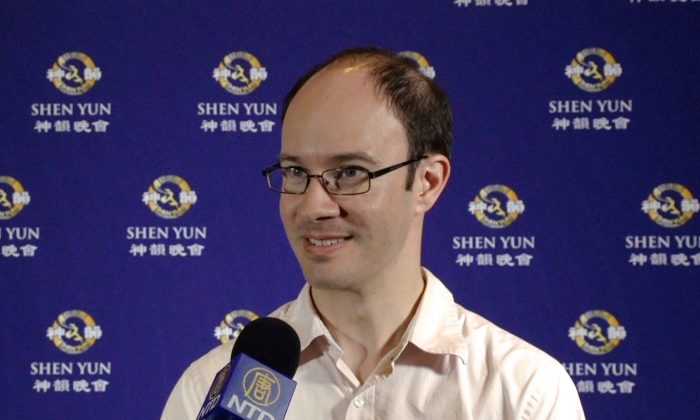 Dr. Denton Thomas said to the artists and musicians, "All of your work is very much valued," as he spoke after the performance at Melbourne's State Theatre, on Feb. 28, 2015. (Courtesy of NTD Television)

“Exposing the audience to either sounds, or visually seeing the instruments being played and of course with a language that is idiomatic to those instruments is really critical,” he said.

He stressed the importance of the integration of traditional [Western and Chinese] instruments.

Dr. Thomas is a member of the music fraternity Phi Mu Alpha Sinfonia and the Pi Kappa Lambda honour society, according to abode.org.au website.

Besides his proficiency in playing brass instruments, Dr. Thomas trained as a trombonist and knew Shen Yun trombone player from Melbourne, Alistair Crawford.

Dr. Thomas said he had looked forward to hearing the Shen Yun Orchestra as it was of such a high calibre performing with both Western and Chinese instrumentals in a unique way.

“To me that is impressive. I can go and hear an erhu player who performs in a Chinese way, but hearing them play in a Western orchestra where they [integrate] both is quite unique, and I think very effective in this setting,” he said.

Dr. Thomas was also impressed with the Shen Yun Orchestra’s ability to perfectly match both the orchestra and animated digital backdrops, and the story-dances.

“Through the universal language of music and dance, Shen Yun weaves a wondrous tapestry of heavenly realms, ancient legends, and modern heroic tales, taking you on a journey through 5,000 years of Chinese culture,” says Shen Yun’s website.

He appreciated the company performing in Melbourne and caught the last performance of its Australian 2015 World Tour on Saturday evening, Feb. 28.

“All of your work is very much valued, both from an audience standpoint and from other artists around the world, and thank you [to Shen Yun] for coming,” he said. “It’s a wonderful fusion of Western and Chinese components, and it’s really, really unique to see this in Melbourne, to see this mix, especially with high-calibre musicians and performers.”

He said the Shen Yun Orchestra was used very effectively as a means of telling a story, portraying humour, action, and emotional content.

He also considered the fact that Shen Yun tours 100-plus cities, presenting more than 400 performances in 20 countries all over the world.

“And just seeing how that orchestra is used, and … what sort of decisions are made about what instruments are there, all these things, to me it just becomes very effective in achieving and presenting this art, but also in a really engaging way.”

Dr. Thomas’s works include chamber and solo works, most of which prominently display the trombone and other brass instruments, the adoba website said. His teaching in Australia has included secondary-level masterclasses and instruction, a lecture at the ‘Sounds Great’ Conference on Excellence in Education, and repeated appearances as a jazz and concert band adjudicator and tutor at the Melbourne School Bands Festival.