Music Ties It All Together 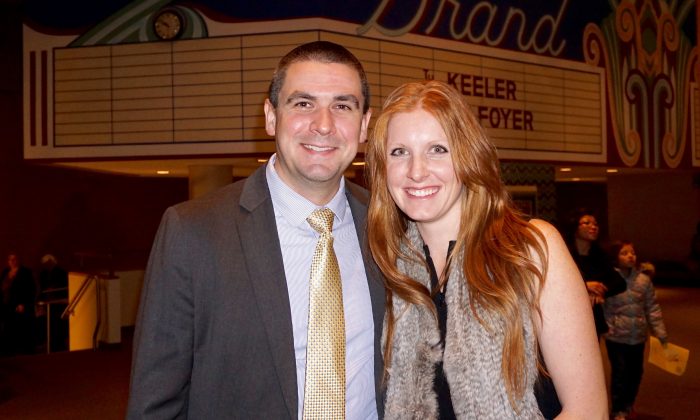 GRAND RAPIDS, Mich.—Having met in college orchestra, both Kevin and Hillary Butterfield have had an appreciation for the arts and music. At DeVos Performance Hall on Dec. 30, they decided to indulge in this appreciation by treating each other to Shen Yun Performing Arts.

“The music was great, I loved the music,” said Mr. Butterfield who used to play trombone in the brass section with his wife who plays French horn. Mrs. Butterfield felt it was really great to experience a new culture in such a fun and beautiful way.

New York-based Shen Yun met Mrs. Butterfield’s expectations in terms of beauty and uniqueness, and surprised her with how playful some of the pieces were. The sections of comedy in Shen Yun’s story-based dances were often punctuated with the loud “suona,” a Chinese woodwind with a quirky, resonant timbre.

She said it was really fun and neat just to hear some instruments that are not otherwise used to being heard mixed in with familiar traditional sounds.

Being his first dance experience of any type, Mr. Butterfield was very impressed by the colors and how wonderful and graceful it all was. Now a high school math teacher, he says he absolutely sees the educational value in a production like this. “We see the important value in all sorts of arts,” he said.

Mrs. Butterfield felt that the conviction of the dancers really came through in the pieces that depict some of the struggles and persecution happening in China today.

She thought so many of the pieces were very moving. She explained, “When you see it with the lines on the stage and the graceful movements, the poise of the dancers, all of it comes together to create a lot of feeling in the playful pieces and the pieces where you see the struggle, and music ties it all together.”

It was the last performance in Grand Rapids, Mich., that the Butterfields attended, so they said they would promote the performance for the next time it comes around “for sure.”