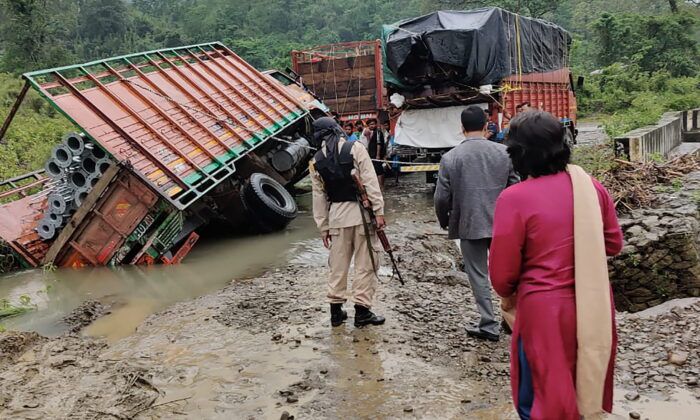 At least 16 people were killed and 60 others were feared trapped in a mudslide triggered by prolonged heavy rain at a railroad construction site in northeast India, Indian officials said on July 1.

Nineteen people have been sent to the Noney Army Medical unit for treatment, and rescue operations are still ongoing, The Times of India reported.

Officials said that most of the victims were sleeping when the mudslide hit Manipur’s Noney district on June 30.

“More are being searched. Not confirmed how many are buried, but as of now, 60 people, including villagers, army, railway personnel, and laborers [are feared trapped],” Director General of Police P. Doungel told reporters.

More than 200 disaster response workers and police are using earth-clearing equipment like bulldozers to rescue those buried under the debris in the area. But the heavy rain and landslides have impeded rescue efforts.

According to the Northeast Frontier Railway, the landslides have damaged construction worker camps, track formation, and the new railway line project at the Tupul station building.

“I pray for the safety of all those affected. My thoughts are with the bereaved families. May the injured recover soon,” Modi said in a tweet.

Continuous rainfall over the past three weeks has wreaked havoc across India’s northeast—which has eight states and 45 million people—and in neighboring Bangladesh.

An estimated 200 people have been killed in heavy downpours and mudslides in states including Assam, Manipur, Tripura, and Sikkim, while 42 people have died in Bangladesh since May 17. Hundreds of thousands of people have been displaced.