Much of Our ‘Mass Formation Psychosis’ Comes From Google 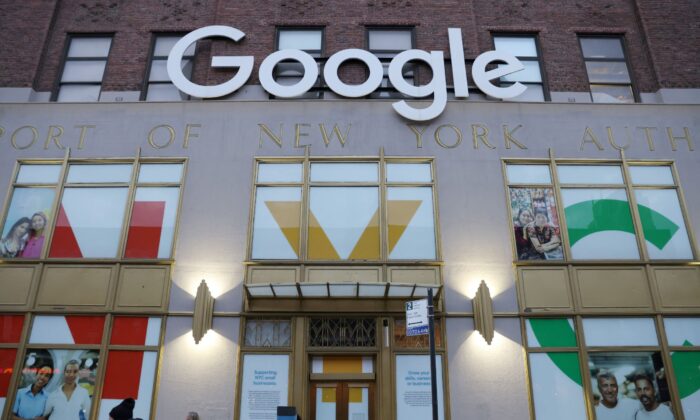 The logo for Google LLC at its office in Manhattan on Nov. 17, 2021. (Andrew Kelly/Reuters)

Google quite possibly is the greatest, most efficient purveyor of misinformation in the history of the human race.

That’s the company whose original watchword was “Don’t be evil.” I remember wondering at the time why they would find it necessary to say that.

I learned the answer quickly when it was rumored that the company was working with the communist Chinese on a Google-style search engine that added the totalitarian fillip of being able to censor at will facts and opinions uncomfortable to that regime.

Bad publicity made them pull back from that particular enterprise, but it was probably a good learning experience for what they now do so well and have for a long while: employ their technical expertise to manipulate information. What you see is what they want you to see.

A very recent example of this concerned Dr. Robert Malone’s contention that much of the U.S. public was suffering from a mass formation psychosis, essentially a society-wide hypnosis via propaganda similar to that experienced by the Germans during the Weimar Republic.

This would explain the COVID hysteria that overwhelms so many of our citizens.

It also might explain, if we look backward only slightly, the phenomenon known as “woke.” How many do you know who describe themselves as “woke” who haven’t bought into the COVID hysteria? How did they learn what they were supposed to think—directly or subliminally?

Back to that recent example.

“There have been many commentaries about mass formation psychosis that have hit major conservative news outlets today,” The Liberty Daily’s J.D. Rucker reported on Jan. 1 after Malone had appeared on Joe Rogan’s popular podcast. “I even posted one from Dr. Joseph Mercola last month that has had a resurgence in popularity. Several reaction videos have been made as well with many diving deeper than what Dr. Malone could cover on Rogan’s show.

“But instead of linking to the video of Dr. Malone, any of the stories that dive into the phenomenon, or even reaction videos that expand on the concept, Google decided to promote some random dude’s minute-and-a-half video ‘debunking’ it when people search them for ‘mass formation psychosis.’”

No surprise there. That’s how the Google algorithms work, a subtler and ultimately more lethal method than they would have designed for China.

Rucker goes on to praise the search alternative DuckDuckGo for putting Malone’s video on top.

I’m not so sanguine. Though I want to like DuckDuck for its privacy policies, I find it a weak search engine because, like Google, it relies so heavily on Wikipedia, which, having betrayed the even-handed idealistic intentions of its founding as an online encyclopedia, has become a dangerous font of leftist bias masquerading as fact. If you want a taste of how extreme it is, go look at the entry for the media company you are now reading.

And yet for almost any well-known person or company, DuckDuck, like Google, takes you first to Wikipedia. Microsoft’s Bing does the same, as do so many others.

But this is about Google, the lion of search engines with over 86 percent of the market. Several other search engines are actually Google in disguise, using the “mother company’s” algorithms for their basic selections, so when we think we are using another method, we’re really still using Google.

In other words, it dominates and controls the flow of information to an almost inconceivable degree.

That’s me playing with words, obviously, but the original is far more interesting, especially in totality:

“Power tends to corrupt, and absolute power corrupts absolutely. Great men are almost always bad men, even when they exercise influence and not authority, still more when you superadd the tendency or the certainty of corruption by authority.”

Tough stuff, no? Were Sergey Brin and Larry Page, the two young Stanford students who founded Google “bad men”? Probably not at the time, but they may have been corrupted from the staggering amount of money they made and the amazing influence they accrued. Alphabet, Google’s parent company, is currently worth over a trillion dollars.

Did they realize way back then that they would exercise such influence over world opinion? They were techies, not philosophers.

Interestingly, Brin emigrated with his family from the Soviet Union at the age of 6. His parents were intellectuals who also worked in the sciences. He’s obviously an extremely smart guy, involved in various technical projects from self-driving cars to head-mount display eyeglasses.

But the content derived from such innovations seems far away. Any criticism of socialism or what happened in the Soviet Union is in the deep dark past, if it was ever there.

Content determination is left to low-level worker bees, obeying what they think their superiors want, who make decisions from a rigid “woke” progressive playbook. Downgrading the likes of Dr. Robert Malone in favor of whoever is at hand is virtually automatic.

The assumption is that a kind of simple-minded liberal/progressive politics should govern the algorithms, that that political view is again automatically “the truth” as far as our society, indeed all human society, goes.