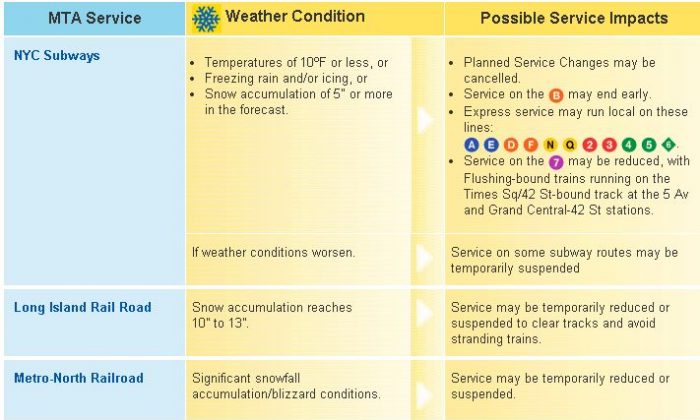 MTA on New York Snow: Are Subways Closed, Delayed Due to Weather?

Snow is currently falling at a rapid pace in New York City on Thursday, and many are wondering what’s going to happen with the Subway system.

As of 1:50 p.m. ET, the MTA didn’t have any service changes, closures, or alerts due to the snowfall.

It’s another snowy day out there. Meet your bus with MTA Bus Time and avoid waiting outside in this winter weather. http://t.co/QQRXOaSVCR

According to the agency’s website, subway travel will be impacted if “temperatures of 10ºF or less,” “freezing rain and/or icing,” or “snow accumulation of 5″ or more in the forecast.”

According to NYC.gov, “A Winter Storm Warning remains in effect from through Thursday at 7 PM for New York City. The current forecast calls for up to 8 inches of snow. NYC Emergency Management has released a hazardous travel advisory for Thursday.”

The advisory is in effect until 7 p.m. Thursday. Weather officials predict snow accumulations of between 4 and 7 inches by the time it ends. The heaviest snow will fall early Thursday morning.

Less snow is predicted for southern Westchester County. A winter weather advisory is in effect there during the same period. Between 2 and 5 inches of snow is expected.

Some flights were canceled or delayed at the area’s three major airports.

Some schools in Westchester and on Long Island were closed for the day.

Temperatures in the 20s on Thursday were expected to plummet to single digits by Friday morning.

In other travel delays, a plane from Atlanta skidded off a runway at LaGuardia Airport while landing Thursday, crashing through a chain-link fence and coming to rest with its nose perilously close to the edge of an icy bay.

Photos showed the nose of the plane resting on a berm that separates the runway from Flushing Bay. Passengers saddled with bags and bundled up in heavy coats and scarves slid down an inflated chute to safety on the snowy pavement.

Emergency responders are still assessing people, and one person was seen getting into an ambulance at the airport.

Images show the plane resting in several inches of snow. Passengers trudged through the snow in an orderly line after climbing off the plane.