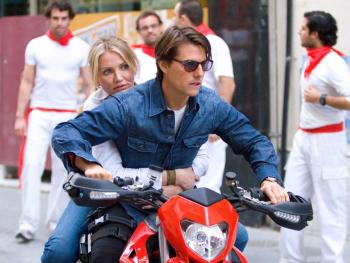 Ok, lets see here… Tom Cruise as a secret agent who saves a beautiful blonde haired damsel in distress, defends and protects a young scientist from an unknown villain, and travels the globe and the hot spots of Austria, Spain, and the heartland of Wichita, Kansas. Sounds like the next installment of the “Mission Impossible” franchise, right?

But no—this isn’t “M.I.IV,” and Tom Cruise’s character, while still harnessing the kill-skill of a top spy, is certainly no Ethan Hunt. Cruise’s Roy Miller has all the call signs of his traditional alter-egos, yet the quirkiness of…well… who you would think—Tom Cruise himself.

Through an odd course of events, Miller saves Cameron Diaz’s character June Haven and begins an entanglement of two distinctly different people. Miller, while performing drop kicks, hand to hand battles, and high flying acrobatic shoot-out sprees, begins to connect with the timid but cute June through his detached yet comforting personality.

June overcomes her initial shock of guns and violence and begins to take to the secret agent sidekick role like a gun to a holster. In the process, the sparks between the two fly as they uncover what is a villainous plot to acquire sought-after government technology.

While there is certainly enough action to keep the summer blockbuster lovers with enough to chew on, “Knight and Day” does more than take you on adventurous ride. But there is a catch to it—and that is if you decide to let it hook you in.

Cruise’s initial quirkiness is a bit disorienting, and to some degree feels like a post-Oprah interview film. But then you realize it is completely intentional. The film and character play upon what has become the mainstream perception of Cruise, and I couldn’t help but chuckle.

Diaz plays the part of June Haven beautifully and the Cruise/Cameron chemistry is a noticeable item, and the driving force behind the film.

Peter Sarsgaard and Tony award winning actress Viola Davis play their supporting roles to the T, and director James Mangold’s (“Walk the Line” and “3:10 to Yuma”) choice for real action scenes over excessive CGI-ification keeps the film visually entertaining, while still being somewhat based in reality.

Yet the choice is ultimately yours. Like the old knight (no pun intended) told Indiana Jones, “Choose wisely!”

Take the hook or not—If you do, you will enjoy the ride. If not, it will certainly be a drag.