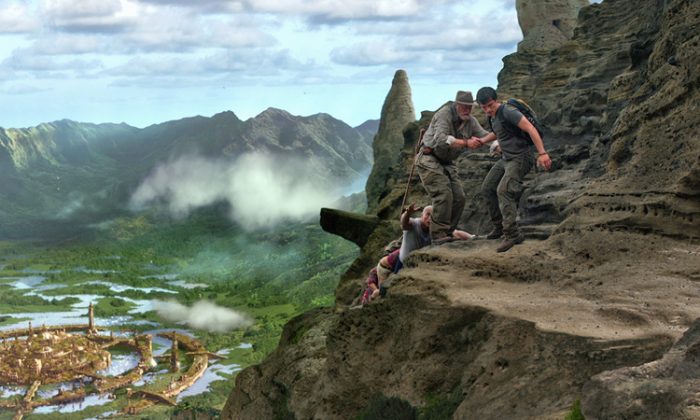 Hollywood can add yet another “stranded on an island” film to its collection. This time around, Journey 2: The Mysterious Island showcases an extremely colorful and zany three-dimensional adaptation of Jules Verne’s 1874 novel “The Mysterious Island” as a sequel to the 2008 family film “Journey to the Center of the Earth.”

In an attempt to squeeze in some father-son bonding time and get Sean to like him, Hank tags along for the adventure to an island near Palau (in the South Pacific) with the mysterious coordinates that Sean and he pieced together. They pulled the coordinates from maps in the books The Mysterious Island by Jules Verne, Robinson Crusoe by Robert Louis Stevenson, and Jonathan Swift’s Gulliver’s Travels.

To get to the island, Hank and Sean persuade a local tour pilot, Gabato (Luis Guzmán), and his attractive daughter Kailani (Vanessa Hudgens) to fly them in their dilapidated helicopter.

The mysterious island is surrounded by storms and bad weather. Right on cue, thunderstorms and lightning destroy most of the helicopter mid-flight, sending the four crashing. They wake up on the beach of the Mysterious Island, miraculously without a single broken bone.

On finding Alexander, the group realizes that seismic shockwaves will submerge the island, burying all the treasure. They have little time left before the island starts to sink.

Johnson, well known as The Rock, takes the reigns from Brendan Fraser of the first installment in the series. Johnson flaunts many of his personal talents in his role as Hank—singing, playing the ukulele, and even making his pectoral muscles dance. He gives a solid performance as a stepfather struggling to reach out and connect, but falls flat in his comedic lines, especially with Michael Caine’s character, Alexander.

The film is enhanced by the presence of Caine and Guzmán, which raises its overall credibility. Despite most of the younger audience not recognizing him outside of the “Batman” films, Caine in his minor role as the grandfather makes this film much more adult-friendly and serves as a delightful distraction from some mediocre screenplay jokes. Guzmán provides consistent comic relief throughout the film as a doting father, but one who usually gets into trouble.

Hutcherson’s role as a teen filled with angst is easily overshadowed in Journey 2, though you can expect to see him quickly shoot to fame when the first installment of The Hunger Games trilogy comes out next month, in which Hutcherson co-stars with Jennifer Lawrence.

Hudgens also brings little to the film, except widening the target demographic to include preteen and teenage girls in the more male-oriented action-adventure flick. As a veteran of the smash Disney High School Musical franchise, she’s a natural selection to round out the cast.

Journey 2: The Mysterious Island gets an extra half-star for the stunning life-like graphics and the use of real jungles instead of green screens. Canadian director Brad Peyton and screenwriters Richard Outten, Mark Gunn, and Brian Gunn build an island of fantasy and fauna that pushes the imaginations of children and adults alike, delivering an overall rich experience.