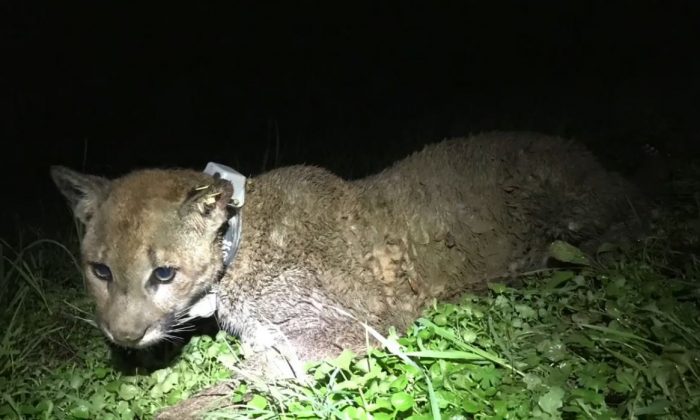 A mountain lion was shot dead in the Napa area of California after it killed two sheep, prompting criticism from some. (Audubon Canyon Ranch)
US News

A mountain lion was shot dead in California after killing two sheep on successive nights and trying to snag a third.

The animal was just 20 feet from the front door of the home of Alejandra Calderon, who lives in the Napa area with her husband and three young children.

Hitting back at people criticizing her husband for shooting the beast, she told The Press Democrat: “As a parent, I hope that they understand how scared we were in the moment. It was a scary experience.”

The lion Calderon shot was trapped the week before and fitted with an electronic collar as part of an Audubon Canyon Research Project, and its death was the third time in the two-and-a-half-year program that one of the cats in the study has been killed after preying on livestock.

Quinton Martins, a South African biologist and big cat expert, claimed that the landowners are to blame, believing they have to keep the domestic livestock properly enclosed.

“There isn’t anybody who can give me a single good reason about how the killing of that cat does anything good,” Martins said.

State Fish and Wildlife Law Enforcement Lt. Jim Jones said that the Calderon family reached out several times to the agency and that officers investigated the killing. He said the family did not need a permit to kill the mountain lion if their livestock was in imminent danger.

The state Department of Fish and Wildlife said that mountain lions became a “specially protected” species in 1990 with the passage of Proposition 117, making hunting them illegal in California.

“Mountain lions may be killed only 1) if a depredation permit is issued to take a specific lion killing livestock or pets; 2) to preserve public safety; or 3) to protect listed bighorn sheep,” it stated.

In a post on the Ranch’s Facebook page, the group added, “We are deeply saddened by the loss of (another) one our study animals and also the unnecessary trauma on the landowner’s unsecured animals.”

“We, as a community, need to understand that ALL PREDATORS will kill unprotected pets or livestock. It is 100% our responsibility to take care of our pets and livestock before conflict occurs. Killing the wild predator is not an effective or reasonable long-term strategy for properly managing pets or livestock,” it said.

The mountain lion that was shot had been trapped after killing a goat belonging to a nearby resident, Patricia Damery.

“I’ve got grandchildren—6- and 8-year-old grandsons,” Damery, 70, told the Press Democrat. “I walk the trails every day. I was afraid.”

After calling Martins, who came to trap the lion, she said she was convinced that she was to blame for the goat being killed.

“Honestly, it changed my feeling about the whole process,” she said. “He did what lions do. He killed game, and it was my fault for having that goat out, but also he was such a beautiful lion. … It was about being in the beauty of nature there.”

Referring to the trap and tag, the Audubon group said on Facebook on Feb. 5: “In another win for wildlife, last night a very caring and involved landowner chose to call our Living with Lions team to capture and collar a mountain lion who killed her goat.”

Another WIN for wildlife

In another win for wildlife, last night a very caring and involved landowner chose to call our Living with Lions team to capture and collar a mountain lion who killed her goat. The team headed into the Napa hills, set up a trap and well after midnight were able to secure P15, a young male approximately 13 months old and just recently dispersed from his mom. This landowner joins two others in the past month who did the right thing when faced with a pet livestock loss: they recognized that killing the lion via a depredation permit would do no good and that by opting to GPS-track these lions, our entire North Bay community will be able to learn so much more about coexisting with wildlife. Grateful for her decision, we suggested she give P15 a name. She chose JUPITER! If you have a livestock/wildlife conflict, please contact us right away. **THANK YOU** to our community for supporting this project in so many ways.

“This landowner joins two others in the past month who did the right thing when faced with a pet livestock loss: they recognized that killing the lion via a depredation permit would do no good and that by opting to GPS-track these lions, our entire North Bay community will be able to learn so much more about coexisting with wildlife,” it added.

Calderon, though, told the Press Democrat that she and her husband killed the lion because it kept killing their sheep, despite their best efforts to prevent it. Just before being shot, it was also close to their house.

“Of course, I totally understand people being upset, whoever was tracking these animals. But that was not our intention to just do it for the heck,” she said. “We would never do anything like that. We did it for safety.”