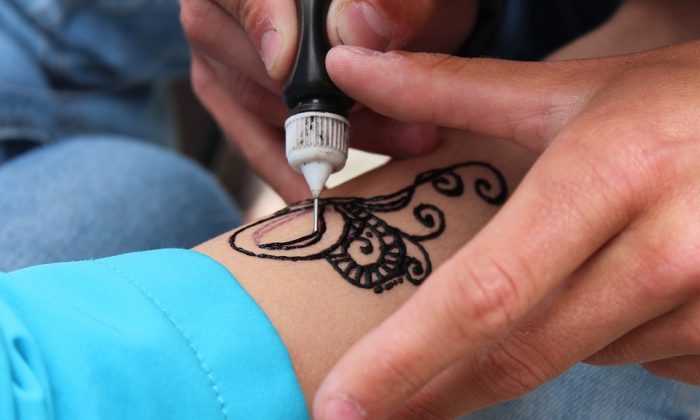 A British mother has expressed fury at a nursery for not consulting her before giving her 4-year-old daughter a henna tattoo.

Hull Live reported that the mother, who did not wish to be identified by name, said she was “baffled” why the nursery staffers would not ask parents’ permission before applying the temporary tattoo that stains the skin for about two to four weeks before wearing off.

“I am baffled as to why the nursery would have henna out in the first place,” the mother wrote on an online forum for parents, as cited by Hull Live. “It is brown henna and I don’t think it is particularly dangerous but I am quite miffed that nursery staff thought it was OK to give my 4-year-old a temporary tattoo.”

The mother then asked Mumsnet forum participants, “Would you complain about this?”

Hull Live reported that one person said: “That’s really bad and an awful lot of people have reactions to henna. I’d be furious.”

Another commented: “I wouldn’t be happy at all. I’d make a complaint and ask them not to do anything of the sort again.”

Some people on the forum suggested the mother was overreacting, posting, “Get a grip, seriously.”

Another supported the previous commenter, saying, “How do some people have the energy to be angry and upset about things like this?”

But according to the Food and Drug Administration (FDA), parents are right to approach henna tattoos with caution.

‘It Could Hurt You’

Henna body art—which traditionally uses an ink derived from a small flowering shrub—is an old tradition in various cultures and is widely seen as harmless fun.

But the FDA warns that henna tattoos carry some risk.

“It could hurt you, if you actually get one,” the FDA writes on its website, and cites Linda Katz, M.D., M.P.H., director of the FDA’s Office of Cosmetics and Colors as saying that “just because a tattoo is temporary it doesn’t mean that it is risk-free.”

The FDA notes that in place of or in addition to natural dyes, some henna ink manufacturers use an extra ingredient in the form of a coal-tar hair dye containing p-Phenylenediamine (PPD). This makes the henna design darker and longer-lasting, but it comes at a risk.

The FDA warns that some consumers have reported reactions that “may be severe and long outlast the temporary tattoos themselves.”

“MedWatch, FDA’s safety information and adverse event (bad side effects) reporting program, has received reports of serious and long-lasting reactions that consumers had not bargained for after getting temporary tattoos,” the FDA notes. “Reported problems include redness, blisters, raised red weeping lesions, loss of pigmentation, increased sensitivity to sunlight, and even permanent scarring.”

In its warning, the FDA posted a photograph of a 5-year-old “who developed severe reddening where the tattoo was placed.”

“Some reactions have led people to seek medical care, including visits to hospital emergency rooms,” the FDA warns. “Reactions may occur immediately after a person gets a temporary tattoo, or even up to two or three weeks later.”

United States law does not permit the use of PPD in cosmetics intended for use on skin.

‘Would You Be OK With This?’

In a Facebook post that includes a photo of the henna-stained hand of the 4-year-old girl, Hull Live asked its followers, “Would you be OK with this?”

The reactions were mixed, though most commenters said permission should have been sought before applying a substance that may have caused an adverse allergic reaction.

Cathryn Hartley commented: “We did this in primary school when learning about other cultures at around 7/8 yrs old. Loved it and was a great way to connect with peers from different backgrounds whose mums came in and did it. 4 maybe a bit young though I agree, especially if parents permission wasn’t sought beforehand.”

Julie Rajput wrote: “When I had one the artist insisted I checked my skin sensitivity beforehand. I would not be a happy parent. Great idea but had to be done safely.”

Alison Morrell noted: “I think when you’ve worked in early years it’s hard because you would always ask. Henna can be one of the most reactive products on a child’s skin. However culturally it’s wonderful.”

Gemma Louise Dawson commented: “Permission should have been sought from parents before using a product such as henna, however allergic reactions can be caused by anything. A child could use paint for the first time, or use felt tip on skin for the first time or try a piece of fruit etc… you can’t wrap your kids in cotton wool 24/7.”

Cath Burnham posted a disturbing photo of a woman’s blistered hand captioned “Allergic reaction to Henna tattoo,” and wrote: “People saying that they wouldn’t be bothered and wouldn’t mind if this happened to their child without getting permission but would they be so enthusiastic if they had an allergic reaction to the dye used in the ink and it did this to them? I’m no snowflake but I would be seriously unhappy if my child came home from school with that on their hands.”