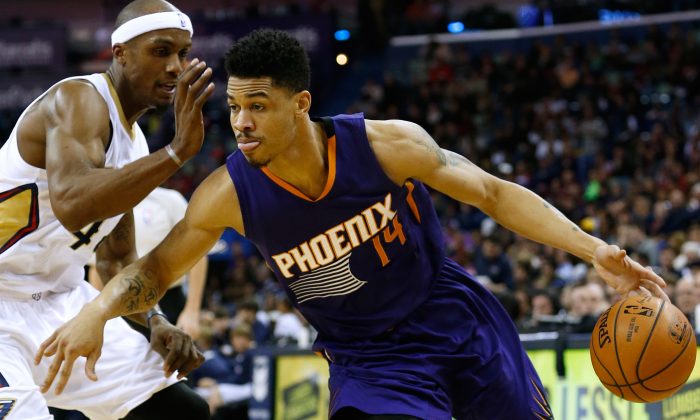 The February 18 NBA trade deadline is fast approaching, and a majority of teams around the league are still looking to add at least one piece before it hits.

Check out the most underrated players potentially available at the deadline below.

Green hasn’t been reported on the trade block–sources insisted to Sporting News that there’s “no way” Phoenix will move Green this year–but several signs indicate that he could be available.

Green’s minutes are down overall from last season, from 28.4 to 21.3. He’s also primarily coming off the bench. Another big indication was Green’s DNP-CD against the Bulls on January 30, after playing every game last season and every game so far this season.

Coach Jeff Hornachek said the decision was based on matchups, but it prompted speculation that Green could be moved soon.

Green, 29, will be an unrestricted free agent after this season, and is making just $3.5 million this season.

Green is an attractive option for contenders looking to bolster their wing, launching almost six three-pointers a game and making a tidy 41 percent of them. The Suns are loaded with players, so might be content to get a draft pick for Green instead of potentially letting him walk away this summer for nothing.

Scola is another player who hasn’t been reported on the trade block, but had a recent DNP-CD spark speculation of his availability.

Scola had played 277 consecutive regular season games before logging no minutes in a 103-82 win over the New York Knicks on January 29. That was good for second in the league.

Coach Frank Vogel apparently informed Scola of his decision the day prior to the game.

“I tried to convince him, but he had argument and felt like it was the right thing. It’s his call at the end of the day,” Scola told Vigilant Sports. “I think he wanted to rest me. He wanted to do that and that’s fine.”

Scola said he is not dealing with any nagging injuries.

Scola will also be an unrestricted free agent after this season, and is currently earning $4.8 million. He’s averaging 9 points and 6.3 rebounds in 20.4 minuets a game, and shooting 45 percent from the field. Due to injuries, he’s started 15 games.

Scola would be a nice pick up as a stretch four, although he doesn’t really shoot three-pointers.

Plumlee has been relegated to a back part of the rotation due to the increased production from Alex Len and the acquiring of Brandan Wright.

Plumlee and his agent are working with the Suns on finding a trade partner, reported ESPN, preferably for a first-round pick.

Unfortunately, the Suns are not getting much interest, a source indicated to Yahoo.

As other options close, though, a team will likely take a chance on the 26-year-old. His numbers have dipped this season due to decreased playing time, but he’s still grabbing five rebounds and scoring 4.4 points in about 18 minutes a game.

Plumlee won’t start anywhere but can provide a strong backup presence at power forward and center for teams. He’s also still on a rookie contract for another season, providing further incentive to pick him up.

What a difference a season makes. Stephenson wasn’t highly sought after during the offseason, but the Indiana Pacers did want to bring him back. Instead, Michael Jordan helped convince the budding star to join Al Jefferson and Kemba Walker in Charlotte.

Stephenson has been extremely underwhelming, though, and the Hornets have had more success with him off the court than on it.

The swingman is shooting just 37 percent from the field, and a paltry 14 percent from 3-point range, as he’s struggled to fit into the Hornets offense.

However, in another environment–including back in Indiana–he could easily regain his form. That potential was seen on January 31, when Stephenson shot just 2-10 but dished out 13 assists and grabbed 5 rebounds.

The biggest barometer of what it would take to acquire Stephenson is the reported almost-completed deal that would have had the Hornets acquire Jarrett Jack and Jeremy Lamb. Another potential deal would have had Charlotte gain Joe Johnson from the Nets.

In other words, the Hornets want some return on Stephenson in the form of contributing players, not draft picks, as Jordan wants to keep making the playoffs. The team has vaulted back into the top eight in the East, and wants to stay there.

Williams is available for a draft pick, likely in the first-round, indicated Marc Stein of ESPN.

Williams is shooting poorly this season (39.9 percent), but can still impact the game by driving and dishing, and is no stranger to defense. Despite a 33.8 percentage from three, he is doing better on catch-and-shoot, with the percentage rising to 41.4 in those cases.

He also poured in 52 points on January 13, one of a handful of players to eclipse 50 so far this season.

If a contender wants to pick up a backcourt piece, Williams could be the guy.