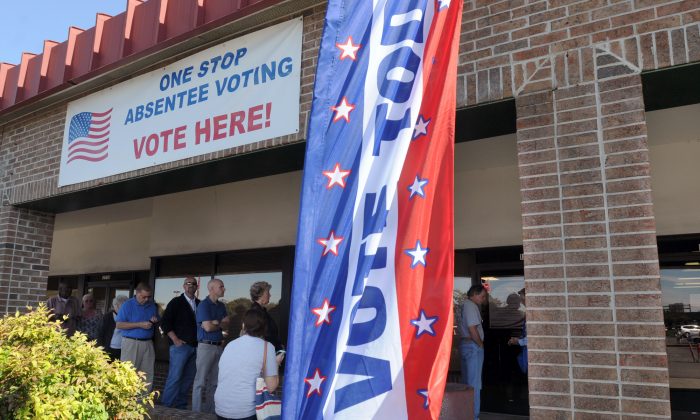 More than 45 percent of North Carolina’s nearly 6.9 million registered voters have already cast their ballots ahead of election day, with Democrats and Republican turning out in roughly equal proportions, the state’s elections board said Sunday.

Almost 3.1 million voters have made their choices at early-voting locations or by mail-in absentee ballots, the State Board of Elections said Sunday, a double-digit increase over the early voting period during the last presidential election in 2012.

But percentages for Democratic and black voters remained lower compared to four years ago. Blacks comprised 22 percent of the early vote compared to 27 percent during the last presidential election, when Republican Mitt Romney won the state.

About 7 out of 10 voters submitting absentee ballots have come from white voters during early voting this year, an increase of about 17 percent over their 2012 totals. Meanwhile early ballots from black voters decreased by 9 percent from four years ago.

Ballots cast by voters who declared themselves unaffiliated with either of the two major political parties surged by 40 percent.

The major remaining question is how many more people will cast ballots on Tuesday and whether it will be more or less than the 4.5 million who cast ballots in 2012, Catawba College political scientist Michael Bitzer wrote in an email.

With close campaigns for North Carolina’s next governor and U.S. senator also on the line, the state was ground zero for the presidential fortunes of Republican Donald Trump and Democrat Hillary Clinton.

Trump’s vice presidential running mate, Mike Pence, was scheduled to hold a rally Sunday at the airport in Hickory, setting up a frantic slate of campaign rallies on Monday.

Trump is scheduled to appear Monday afternoon at an arena on the State Fairgrounds in Raleigh, wedged between stops in other battleground states of Florida, Pennsylvania, Michigan and New Hampshire.

Democratic vice presidential nominee Tim Kaine campaigns in Charlotte and Wilmington on Monday. Hillary Clinton closes out her campaign rallies in Raleigh, where she speaks at a midnight rally ending in the first minutes of Election Day on the campus of North Carolina State University.