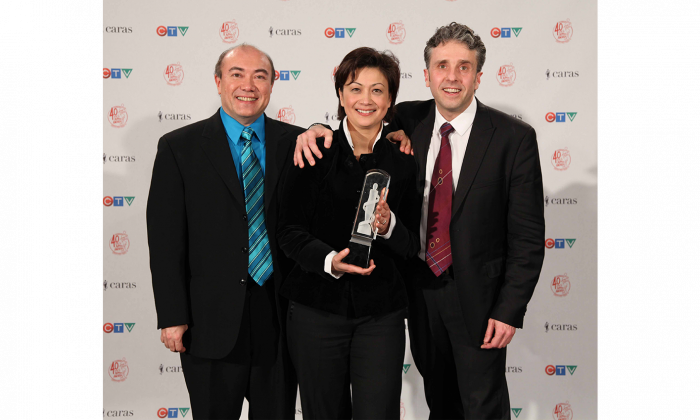 The Gryphon Trio at the 2011 Juno Awards where the group won for Classical Album of the Year: Solo or Chamber Ensemble. (L-R) James Parker, Annalee Patipatanakoon, and Roman Borys. (CARAS/iPhoto)
Canadian Content

The 44th edition of the Juno Awards on March 15 honoured some of Canada’s most popular and up-and-coming musicians but, like other years, was light on showcasing classical music.

Some argue that the awards should be more comprehensive and inclusive and show the country a more rounded version of our homegrown talent. One way would be to include performances by classical musicians in the annual TV special.

Another way would be to incorporate more than the current four categories for classical music, says Julian Armour, artistic and executive director of the Music and Beyond classical music festival in Ottawa.

“The Grammys have 16 classical music categories, the Junos only have 4, and I can’t imagine why anybody thinks that they shouldn’t have more—they should have as many as the Grammys as far as I’m concerned. It would be a way of showing the general public that classical music is important,” he says.

Armour, who is also principal cellist with the Chamber Players of Canada, notes that Canada has produced many world-class artists in the classical music field and the Junos “should be doing much more” to acknowledge them.

“I think we need to be really celebrating the really, really great Canadian artists that we’ve produced.”

It would be a way of showing the general public that classical music is important.
— Julian Armour, artistic director, Music and Beyond

Roman Borys, artistic director of the Ottawa International Chamber Festival and a cellist with Gryphon Trio—winner of two Junos—says it all comes down to the bottom line.

“From my point of view, the Juno awards are primarily a marketing vehicle for the pop and rock music industry which is where almost all of the real music business revenue is generated.”

However, Borys says he appreciates that the Canadian Academy of Recording Arts and Sciences “gives classical as much attention as it does and by doing so recognizes the high levels of artistry and musicianship present in the end results.”

Like Armour, he would like to see the number of categories for classical music in the Junos expanded.

“I’ve felt for some time that the Classical Album of the Year: Solo or Chamber category should be split, thus making it five categories in classical,” he says.

A cultural gem that has been enjoyed for hundreds of years, classical music is recognized as being important to cultural growth. However, Armour laments that in Canada, there are few classical music broadcast venues and music programs in schools are not always supported.

“I think it’s important to make clear, in my view, [that classical music] is completely under threat in Canada right now. I mean, we’re seeing it basically eradicated from the CBC and Radio Canada, we’re seeing music education in schools diminish,” he says.

“Canada is the only industrialized nation in the world that has virtually eliminated its broadcasting of classical music. … So I think the Junos should cover classical music much more.”

More exposure to classical music is also desirable for its well-documented health benefits, Armour points out.

With files from Pam McLennan