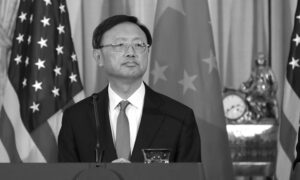 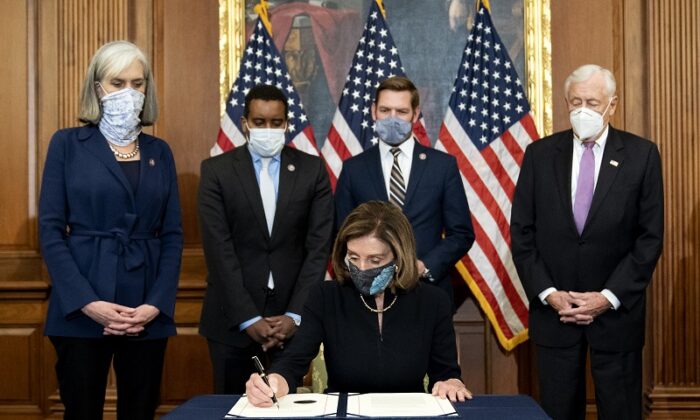 Speaker of the House Nancy Pelosi (D-Calif.) signs an article of impeachment against President Donald Trump at the U.S. Capitol in Washington on Jan. 13, 2021. (Stefani Reynolds/Getty Images)
Viewpoints

Opinion: Moral Narcissism and the Show Trial of Donald Trump

Discussing the Democrats’ impeachment trial in legal terms is a ludicrous waste of time. Anyone literate in the English language can see that the concept of impeaching a former president is entirely absent from the U.S. Constitution.

Removing someone from office who is no longer in office in the first place is a serio-comic oxymoron straight out of the Theater of the Absurd.

What is actually going on is Trump Derangement Syndrome taken from a neurosis to some kind of bizarre psychosis with overtones of obsessive-compulsive disorder.

The level at which this “trial” is worth examining, therefore, has a psychoanalytic, not a legal, tilt. It raises, once again, the question of why the Democrats and their media cohorts despise former President Donald Trump so much.

Yes, I know they fear his political comeback above all things and wish to extinguish it, but what is it, on a deeper level, that makes them believe this man to be such a monster that they are going full Stalinist in conducting what Sen. Rand Paul (R-Ky.) aptly called a “show trial”?

Allow me to be a tad self-referential because I think, at least to some degree, the answer can be found in my 2016 book—actually written before Trump won the nomination and with few specific references to him—“I Know Best: How Moral Narcissism Is Destroying Our Republic If It Hasn’t Already.”

The narcissism I was referring to was not the traditional kind based on the Greek youth Narcissus’s fascination with his own image, but a narcissism of ideas, of “moral” self-description.

I explained it this way: What you proclaim, what you say you believe, is what makes you good, what makes you important—not the actual results of those beliefs, which are irrelevant.

Biden’s recent cancellation of the Keystone XL pipeline could be described as a purely morally narcissistic act—proclaimed as something significant for the environment when, in reality, all it does is put people out of work and give comfort to our enemies as America becomes more energy-dependent. (Ironically, it also has negative environmental repercussions, forcing the oil to be transported by more risky means, such as by rail.)

John Kerry, the White House climate czar, is a moral narcissist par excellence, jetting around endlessly in his carbon-belching private plane to save us all from climate change.

Moral narcissism fits today’s liberals and progressives to a “T,” living millionaire and billionaire lives that make hypocrisy the understatement of all time while disdaining the working class, as well as their needs and values to a degree that would embarrass Marie Antoinette.

Trump undermined all that. He makes and made plenty of proclamations and certainly loves his private plane(s), but he’s all about results.

In fact, he makes a point of delivering on his promises, the exact antithesis of standard operating procedure in Washington, where politicians send us endless emails and texts (almost always asking for money) about what they say they believe or are planning, but almost never about what they have accomplished, as if we don’t and shouldn’t care about that.

It’s the way the game has been played in D.C. for ages, quite comfortable and insular when you think about it, and self-replicating. No wonder Trump is loathed.

(He also made things such as improving the economy seem remarkably easy and quick—just remove excessive regulations and lower taxes—actually common sense, when it was supposed to be so complicated and arcane that only wise politicians and economists could do it over years.)

Although nearly pervasive in the Democratic Party, moral narcissism isn’t exclusive to it. A number of Republicans fit the description as well and you can almost be certain they will be among those voting to convict Trump in the show trial.

These politicians (both sides) and the media are particularly angry because, as narcissists, moral or otherwise, they have a great need of fans—people to admire them constantly and make them feel alive.

Trump ruined that to a great extent by unmasking them as phonies. Rage and vengeance were and are the natural responses.

In a less-overtly psychological realm, it’s not inconsequential that he made his money before coming to Washington; they usually make theirs during and after.

Trump even had the temerity actually to lose half his fortune while serving, at the same time donating his salary to various federal agencies.

How “off-message” is that! Imagine if that became pro forma for our public servants.