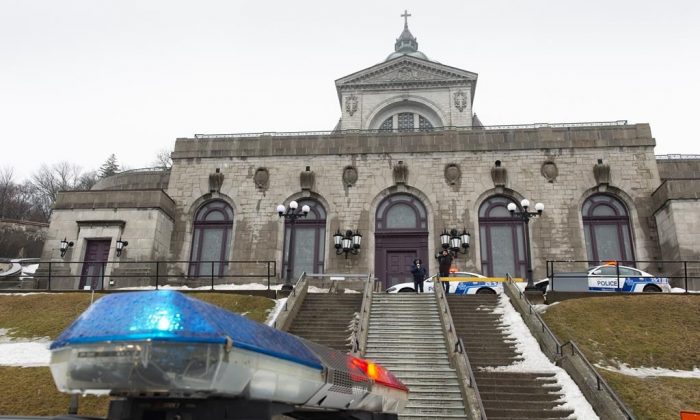 MONTREAL—A Catholic priest was stabbed in front of dozens of stunned worshippers as he was celebrating mass Friday morning at Montreal’s St. Joseph’s Oratory.

A 26−year−old man is in custody and was being questioned Friday afternoon by police. They said he will appear in court Saturday to face charges that have yet to be determined, but which could range from assault with a weapon to attempted murder.

Montreal police spokeswoman Caroline Chevrefils said there is nothing to suggest the attack was linked to any political, religious or extremist group. “Today’s event is an isolated act committed by one individual,” the police wrote on their Twitter account Friday afternoon.

Assault with a weapon at @OSJMR : the suspect should appear in court tomorrow.
The #SPVM is monitoring the situation closely and has offered its support to the @DioceseMontreal. Today’s event is an isolated act committed by one individual.

The incident began shortly after 8:30 a.m. when a man with a knife rushed the sanctuary of the landmark church and stabbed 77−year−old Rev. Claude Grou, the Oratory’s rector.

Philip Barrett, who was sitting near the front of the church, said he saw a tall man rise from a pew and quickly walk into the sanctuary as Grou was preparing to proclaim the gospel.

“He walked over behind the altar and he seemed to strike the priest’s body,” Barrett said. “I think the priest fell down at that time. I do remember the priest was moving away from the man, but it happened so quickly there was almost no time to react.”

Adele Plamondon, a volunteer at the Oratory, said she had just finished a reading when she noticed a man walking to the front of the church. She thought he was coming to say a prayer in front of the statue of St. Joseph.

“As soon as he arrived in the sanctuary, he lifted his windbreaker to pull out a big knife,” she said. “When I saw that, I left screaming to go to the sacristy and alert security.”

The service was live−streamed on the Catholic channel Salt and Light. Video shows a tall man in a dark jacket and white baseball cap rounding the altar and charging at Grou, thrusting his right arm toward the priest. Grou runs backward a few steps before the assailant pushes him into a banner.

#BREAKING A suspect is in custody after allegedly stabbing Father Claude Grou during mass at Montreal’s St. Joseph’s Oratory this morning. The attack was captured on a live stream of the mass | CBC NEWS https://t.co/OdonDTgXhg pic.twitter.com/9bwQVohJE1

As screams are heard in the background, a group of people run forward, surrounding and blocking the suspect. Others take Grou by the arms and help him to walk backstage.

Barrett and Plamondon both said people quickly restrained the attacker, who did not struggle. Barrett said the suspect didn’t speak or call out during the attack.

Police said the man, who was known to them, was already detained by security guards when the first officers arrived.

Plamondon said the suspect was calm after the stabbing. “The assailant was on the ground, calm, and had two men on top of him who were holding him,” she said. She said she later had a chance to speak with Grou, who appeared shaken but not badly hurt.

Chevrefils said the victim suffered minor injuries to his upper body and was taken to hospital. The Oratory said in a statement Friday afternoon that his wounds were superficial and he would be released from hospital shortly. As of Friday afternoon, no motive for the attack had been suggested.

Father Claude Grou leaves Montreal General Hospital after being stabbed during mass this morning at ⁦@osjmr⁩ – “I look forward to going back to work in a place of peace, even after what happened today. It is still a place of peace. » ⁦@cusm_muhc⁩ @CTVMontreal⁩ pic.twitter.com/ttXa6X5eMq

St. Joseph’s Oratory is among Canada’s largest churches, and pilgrims from all over the world are drawn to its domed roof and stunning architecture.

After the incident, Barrett said, some of the roughly 60 members of the congregation began praying, both for Grou and for the suspect.

He said he was shocked that an attack would happen in a place he has come to see as a haven. “I really find it’s a welcoming place,” he said. “I just hope that as a result of this, I mean, I can imagine they’re going to need more security, but I hope they can still keep that welcoming spirit.”

Montreal Archbishop Christian Lepine offered his support to Grou and those affected by the crime.

“Faced with this human drama, my thoughts are also with those who were present at mass, with the faithful from here and abroad, and all of society, because we are all affected,” he said in a statement.

“We are all shocked by this act of violence that has taken place in our city, in a space dedicated to peace.”