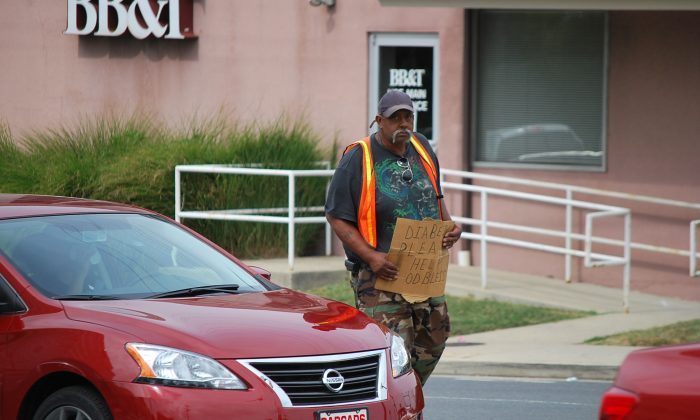 Montgomery county residents are regularly faced with the question of whether or not to give to panhandlers as their cars idle at various popular intersections.

The county government proposes an answer to the question. Give, but not directly to panhandlers, says the county. Ike Leggett, Montgomery County executive, launched the program on Sept. 9 called “Give a Hand-Up, Not a Hand-Out.”

The program encourages county residents to give to charitable organizations with proven records of success assisting those in the need instead of giving cash to panhandlers.

Among the concerns of the county government are the safety of panhandlers, who often stand in the middle of busy roadways, and the drivers, who may be distracted by panhandlers.

“I hear a lot from county residents who are concerned about the proliferation of panhandlers at intersections throughout the county,” said Leggett.

“I agree that the status quo is unacceptable. Even though panhandling is legal under the First Amendment and Maryland law, it is not a safe thing to do and giving cash to panhandlers doesn’t help,” said Leggett at the press announcement at the corner of Veirs Mill Road and Georgia Avenue in Wheaton, Maryland, according to a press release.

“By texting ‘SHARE’ on your cell phone to 80077, you will contribute to grassroots efforts throughout the county to make sure people get the food, shelter, health care and help solving their problems that will make a real difference,” said Leggett. With each text message a $5 donation is given to Community Foundation for Montgomery County, a non-profit, non-governmental organization that will distribute the funds to community service organizations.

Alternatively, you can send contributions to the Community Foundation for Montgomery County, 8720 Georgia Avenue, Suite 202, Silver Spring, MD 20910, or give to the community or faith-based agency of your choice, states the Montgomery County website, regarding this initiative.

At the site of the press announcement, a woman was struck by a car and killed while panhandling in May.

Some homeless advocates and social services experts have stated that panhandlers often use money given to them on the streets to support their addictions to drugs alcohol and tobacco. However, unique personal situations may lead a person to ask for money on the streets.

“I support two people with $700. That’s why I’m out here… I don’t get nothing from the county,” said Marcellous Jackson, 64.

Jackson, who has lived in Maryland for his entire life, supports himself and his partner with dementia with the social security check that he receives from the federal government. The amount does not cover his living expenses and the cost of his and his partner’s diabetes medication, he said.

Some homeless and low income advocates in the county applaud the “Give a Hand-up, Not a Hand-Out” initiative.

“In addition to improving the safety of those in the median strips and the drivers, we applaud the county’s efforts to harness the wonderful generosity of our neighbors,” said Susan Kirk, Executive Director of Bethesda Cares.

“Montgomery County is a very giving and caring community. People respond to assist those they perceive in need. Now together we will work for long-term solutions rather than short-term fixes.”

To aid in getting panhandlers off of the streets, Montgomery County conducts outreach through its Shelter Services program. And it provides assistance to people to help them to get connected with programs to meet their needs. County programs include housing assistance.

County Council member George Leventhal said that funds were added to the county budget specifically for outreach. Leventhal chairs the council’s Health and Human Services Committee that’s in charge of programs that affect the poor, the sick, and the elderly.

“If a panhandler is in crisis [in Montgomery County] they can call our crisis-hotline, said Leventhal. “We want to interact with clients to help them live better than standing on the corner and begging for income,” said Leventhal.