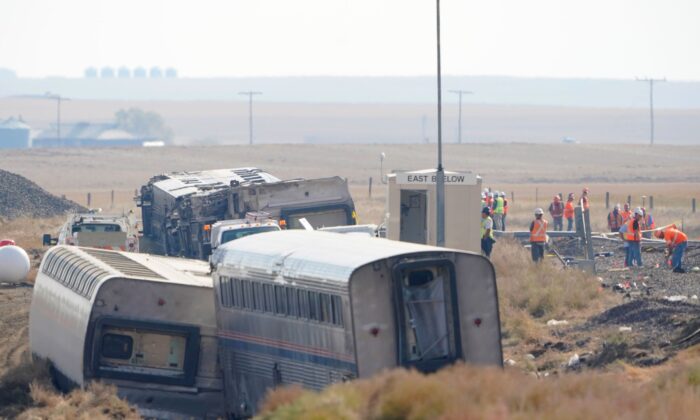 Workers stand near train tracks next to overturned cars from an Amtrak train, near Joplin, Mont., on Sept. 27, 2021. (Ted S. Warren/AP Photo)
US

Federal investigators are examining overturned rail cars and a stretch of tracks as they try to determine why an Amtrak train derailed in rural Montana over the weekend. The accident killed three people and hospitalized seven others.

The coordinator of emergency services for Liberty County, Montana, Sarah Robbin, said the weather was good at the time of the crash.

The westbound Empire Builder was traveling from Chicago to Seattle when it left the tracks Saturday afternoon near Joplin, a town of about 200.

The train had two locomotives and 10 cars, eight of which derailed. The derailment occurred near a switch in the line, where one set of tracks turned into two, on a stretch of track that had just been inspected.