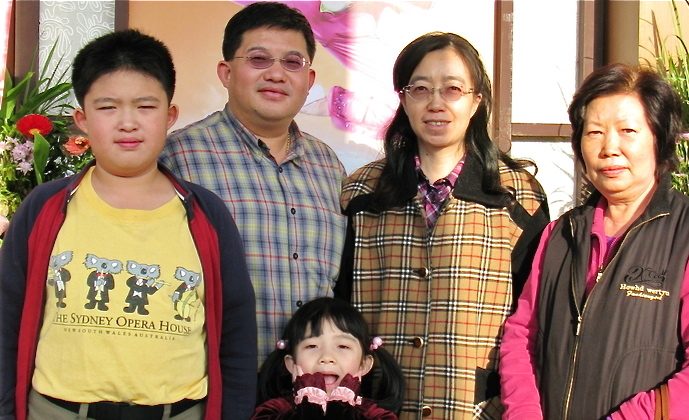 Professor Pan has brought his family to see Shen Yun in Taiwan for three years, ever since he learned about Shen Yun in Mongolia. “We have watched the performance every year for three years.” Mr. Pan said, who was there with his mother-in-law, wife, son, and daughter. “Shen Yun’s performance can enrich people’s soul and enhance the understanding of human values. The performance is worth watching for everyone,” he said.

Mr. Pan explained: “For example, the programs of Mu Guiying Commands the Troops, Crazy Ji Saves the Day, and the Monkey King [How the Monkey King Came to Be], were from the classical Chinese legends. … We Chinese people have little opportunity to study and be cultivated with traditional Chinese culture. Therefore, through seeing Shen Yun, we not only understand and review the Chinese legends, but also recognize the “delicacy and beauty” of the traditional Chinese dance.”

“I was very surprised to see that the dancing movements and postures of the 5,000 years of Chinese history could be revived on the stage again,” said his son Yousheng Pan, a fifth grade student, while Mr. Pan’s kindergarten [intermediate grade] daughter said in a tender voice, “Shen Yun was very wonderful.”

Mr. Pan said that the elegance and beauty of traditional Chinese culture had not received the attention that it deserved on the world stage, and thus, Shen Yun Performing Arts’ touring around the world in recent years deeply touched him. “When I was in Russia before, the ballet troupes of St. Petersburg and Moscow in Russia always toured around the world every year to promote their ballet and other ethnic features. However, we Chinese people have no art troupe to carry forward our Chinese cultural characteristics. Now Shen Yun can highlight and represent the essence of the classical Chinese dance, and introduce it to the world. So I think it is a fabulous performance.”

“I was overwhelmed! It’s hard to believe that now there are people carrying forward and inheriting the Chinese culture. I am very touched!” he concluded.

Pan Binghong and his family happily stepped out of the Sun Yat-sen Memorial Hall to a warm, sunny Sunday afternoon.