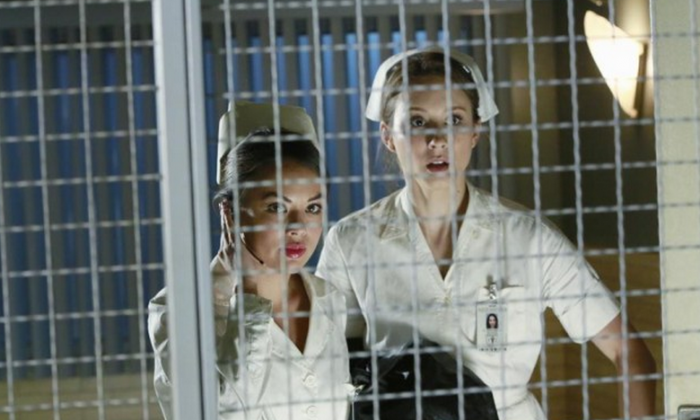 Mona Vanderwaal was the one who died in the Pretty Little Liars season 5 midseason finale on Tuesday night.

The Liars all turned to Mona for help as Alison was going to the cops.

Mona got the Liar’s Ali’s confession and then helped them break into Radley to figure out how Bethany was connected to Alison.

Mona found out a lot and by the end of the episode was convinced that she’d proven Ali is “A,” even telling herself while looking at the mirror that she finally won.

But “A” snuck into her house and killed her.

The Liars show up to the house, which is trashed and blood is everywhere.

The police say that Mona was murdered but the body is nowhere to be found.

Then “A” steals the baby Jesus from Emily’s Christmas decorations and puts it next to Mona’s body, which is actually in “A”‘s trunk.

The death prompted #RIPMona to trend on Twitter across the United States.

“I still cn’t believe Mona died. why oh why? shes used to be one of the best villains,” said one user.

“Devastated! I was starting to like Mona too much for this to happen!” said another.

But some said that they believe Mona’s death was faked and she’ll be back.

Mona actress Janel Parrish later confirmed that Mona is dead with Hollywood Reporter, but said that she’ll still be on the show.

“I was told the day before the table read. She gave me the call. I always heard rumors that when a series regular gets killed from a show, they’re going to get the call from the creator. So when I heard that Marlene was on the other line, I was like, ‘Oh my god, is this my time? Has it come to an end?’ She was so sweet and so wonderful about it. She was like, ‘Hey, I want you to know that this is happening — you are getting killed. But don’t freak out you still have a job. You’re not leaving the Pretty Little Liars family, you’re just going to be the flashback girl like Sasha [Pieterse] was for three years,'” Parrish said.

“I was so relieved because I thought I was getting killed off my show and that was it and that was my last episode. That would’ve been so sad because I love being a part of the show and I love Mona. I’ve played her for five years now and it would have been so sad to part with her. I parted with ‘alive Mona’ but I’ll still be haunting Rosewood in some flashbacks.”

Parrish believes that the backstory will be revealed through the flashbacks.

“I’m hoping they’ll show more about her life with her mom because that was really the first time anyone’s seen her mom and showing that, you’ll learn more about Mona. I’m hoping they’ll show why she became ‘A’ and why she did the things she did and all the things that happened in between. The flashbacks will be really, really great for fans and for me to get answers finally.”

And as for who killed Mona, Parrish said that “will all be revealed.”