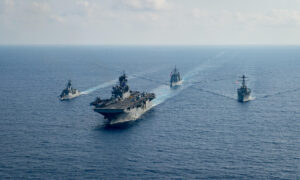 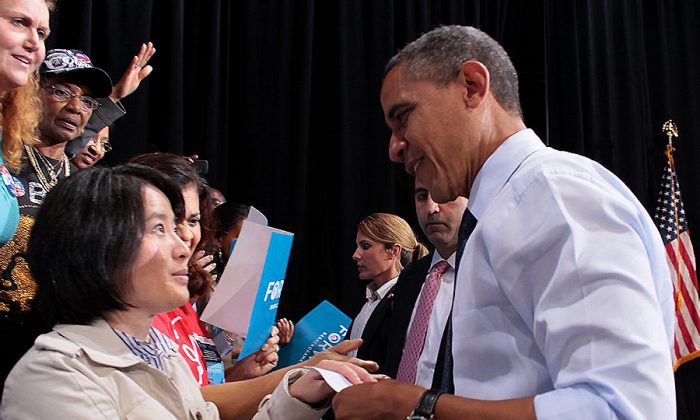 Karen Gao, from the Washington D.C. Falun Dafa Association, shakes hands with President Obama, and gives him a letter at a public campaign event at George Mason University in Fairfax, Va., on Oct. 5. The letter updates the president about the live, forced organ harvesting from Falun Gong practitioners by the Chinese Communist regime, and asks him to help end this atrocity. (The Epoch Times)
China

The fall of 2012 may become known as the point when the tide turned on how the world viewed the allegations of the mass harvesting of human organs by Chinese security forces. A full revelation of the crimes of the Chinese Communist Party, and bringing the perpetrators to justice, got one step closer.

A series of public statements, hearings, forums, articles, and speeches pushed the evidence into a much more prominent position on the international stage.

Since 2006, reports have documented how the Chinese security forces were blood- and tissue-typing detained Falun Gong practitioners, and harvesting their organs, killing them in the process. Since then, activists and researchers have traveled the world holding forums and meeting with public officials to describe the evidence and allegations.

The payoff from those years of work began most prominently with a hearing in the U.S. Congress on Sept. 12, 2012 held by stalwarts of human rights causes in China, Reps. Chris Smith and Dana Rohrabacher. Each heads a subcommittee under the House Foreign Affairs Committee.

The hearing featured prominent experts who have studied abusive organ harvesting in China for years, presenting on the congressional record the evidence they have collected.

Members of Congress were visibly moved and perturbed upon the conclusion of the testimonies.

Rep. Smith said the possibility of the crimes discussed by the witnesses “pushes us into a horrific beyond, a beyond that challenges our language, making ‘barbaric’ too calm a word.” “If this is true, even the powerful, fraught legal term ‘crimes against humanity’ seems inadequate, leached of horror.”

Rep. Rohrabacher, who was the main chair of the panel, was outspoken. “What we’re talking about is a monstrous crime. …To rip open the body of someone who is simply involved in a religious or personal or political idea that is a contrary to the wishes of the ruling elite, and not a physical threat to the regime, this is about the most monstrous crime that I can conceive of,” he said in extemporaneous remarks toward the end.

“This hearing goes to the heart of what America is all about,” Rep. Rohrabacher said. “If we don’t care about things like this, what kind of country and people would we become?”

Not long after that hearing, Smith penned an Op-Ed in the Washington Times reiterating his horror at the evidence and allegations.

The following week, Annette Jun Guo, the editor-in-chief of The Epoch Times, was called upon to give testimony about this newspaper’s knowledge of forced, live organ harvesting in China at the United Nations Human Rights Council.

She addressed the 16th Plenary Meeting of the Council in Geneva on Sept. 18, a large convocation where representatives from dozens of governments and NGOs are present.

“The killing of innocents for their organs is an attack on the dignity of humankind and the principles of human civilization,” she told the assembly.

“Tens of thousands of lives rely on the decisions made by all of you here,” Guo continued. “The United Nations Human Rights Council must do all it can to carry out a thorough investigation of this matter, put an end to these practices, and seek punishment for the perpetrators.”

Early in October, approximately one-fourth of the membership of the House of Representatives co-signed a letter requesting that Secretary of State Hillary Clinton “release any information” the department has “relating to transplant abuses in China.”

The European Parliament held a hearing on China in December, where Canadian rights lawyer David Matas presented his investigation on organ harvesting. Later, the Brussels Press Club held an event to mark the International Human Rights Day where the organ harvesting issue was highlighted again.

A senior researcher with Amnesty International told a hearing in the European Parliament on Dec. 6 about a “horrifying and disturbing allegation” that “individuals in China have their organs harvested and in the process of that they die.” She continued: “There are many groups that these organs may be taken from, the Falun Gong being one of the main groups.”

Chinese-language media have reported that when Chongqing police chief Wang Lijun spent over 24 hours in the U.S. Consulate in Chengdu, attempting to defect, he turned over to U.S. officials information about organ harvesting in China.

The Congressional-Executive Commission on China, in its annual human rights report published on Oct. 10, noted for the first time that “There continue to be reports of illegal organ transplants in recent years and allegations of organ harvesting from non-consenting Falun Gong practitioners.”

The State Department, even before the events of the summer and fall, for the first time ever, made a similar acknowledgement, noting in hedged language the continued reports.

Human rights activists were encouraged by the long overdue attention, and embarked on attempting to make the matter of live organ harvesting of political prisoners a matter for the U.S. presidential race: How would each presidential candidate respond when informed, clearly and directly, of the evidence?

At least four letters were personally delivered to Mitt Romney outlining the evidence that the Chinese security forces have killed Falun Gong practitioners for their organs by the tens of thousands. Paul Ryan, his running mate, was similarly handed such letters on multiple occasions.

A striking photograph was taken of President Barack Obama receiving one such letter from Chinese-American university professor Karen Gao: The two look at each other as she presents the letter, hoping he will help expose the practice to the world and act to put pressure on China’s regime to end it.