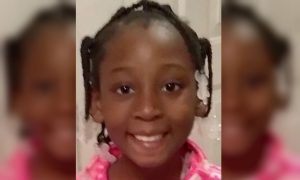 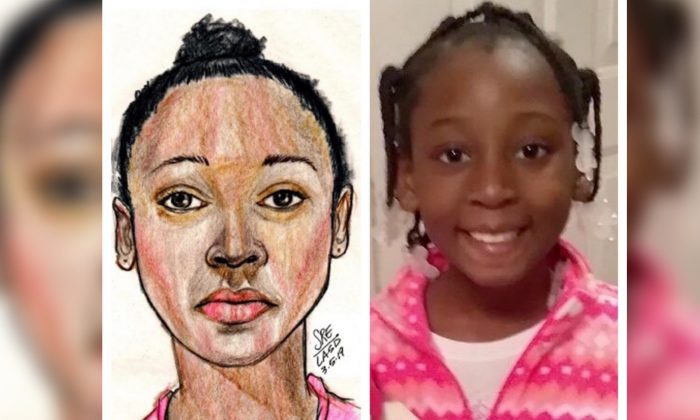 Trinity Love Jones, along with a police sketch, whose body was found on a trail in LA County, Calf., on March 5, 2019. (Los Angeles County Sheriff’s Departmen)
US News

LOS ANGELES—A woman was arrested on suspicion of murder after the body of her 9-year-old daughter was found in a duffel bag along a suburban horse trail near Los Angeles, authorities said on March 18.

Taquesta Graham, 28, the mother of Trinity Love Jones whose body was found in a duffel bag in Hacienda Heights, has been booked on homicide charges. https://t.co/sxDK4dEoFx

The dead girl was found March 5 at the bottom of an embankment in the suburb of Hacienda Heights. She was wearing pants with a panda pattern and a pink shirt that said, “Future Princess Hero.”

There were no obvious signs of trauma on her body. Authorities have not revealed a cause of death or motive.

Graham was extradited from Texas to California last week and was initially held on an unrelated warrant. Graham was in custody Monday and could not be reached for comment.

Hunt, 38, has a previous child abuse conviction from 2005 in San Diego County, according to prosecutors. His arraignment is scheduled for April 16.

Friends and family members described Trinity as a joyful and talented girl who did well in school. A memorial near where her body was found featured stuffed animals, heart-shaped balloons, dozens of votive candles, and notes expressing love for Trinity and one that said, “Rest in heaven, Princess.”

Antonio Jones, the father of the victim, said the girl had been living with her mother, and she hadn’t let him see the girl.

He and other family members were in Los Angeles County Superior Court in Pomona on March 12, as Hunt made a brief appearance but did not enter a plea.

“I felt like a monster. I wanted to do to him what he did to her,” Barbara Jones, the girl’s grandmother, told reporters outside the courthouse.

If convicted, Hunt faces a sentence of up to 50 years to life in state prison, prosecutors said.

Hunt was being held on a $2 million bail and could not be reached for comment.

It’s been nearly one week since 9 year old Trinity Love Jones was found dead in Hacienda Heights. While details are limited we know 2 ppl are in custody. We are also hearing from her family and 2nd grade teacher. I’ll have the latest developments on KCAL9 at 10 and #CBSLA at 11. pic.twitter.com/7ZroEtnGjq