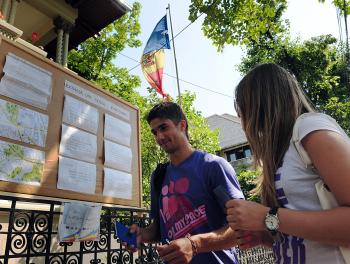 With more than 98 percent of the votes are counted, the opposition, consisting of four major parties, scored 50.7 percent, while the communists garnered 45.1. An eventual opposition coalition would hold 53 parliamentary seats, leaving the communists with 48 in the 101-seat legislature.

This was the second attempt at an election, as accusations of fraud and an outbreak of riots caused the first election to be annulled.

The results give the opposition a parliamentary majority but insufficient power to elect a president, which may spoil plans for the transition to a new government. The Moldovan constitution requires a three-fifths majority (61 votes) to elects a president.

“It is certainly too early to say the opposition have ‘won.' The trend is in their direction, but there is no clear winner. A lot of horse-trading lies ahead,” said Andrew Wilson, senior fellow at the think tank, European Council of Foreign Relations in his comments on the election results.

Apart from being head of state and commander of the military, the president exercises enormous powers, including the appointment of the prime minister, who runs the government. Based on current elections results, the opposition, without the support of some communists, does not have the votes they need to elect a president, which means appointing a prime minister and forming a government will be impossible.

The situation is made more uncertain by the fact that Marian Lupu, leader of the Democratic Party, one of the opposition parties, is a former top communist figure.

If a president cannot be elected, the outgoing President Vladimir Voronin would dissolve Parliament and call for a new election, in accordance with the Constitution.

On April 7, amidst accusations of a rigged parliamentary election in which the communists won 60 seats, angered Moldovans attacked the parliament building. The government responded with a brutal crackdown on the protesters, arresting hundreds and claiming three unconfirmed dead.

Moldova is also troubled by another issue of separatist character. With the support of Russia,TransNistria, a disputed border region, declared independence in 1990, leading to war in the region in 1992.

Moldova, judged by GDP per capita, is the poorest country in Europe.

While all five major parties, including the communists, advocate closer ties with the EU, Russia strives to exert its influence in the region. Russia supported the April crackdown on protesters.

Not surprising is China's support of the communists, signing a letter of intent to offer Moldova a credit line worth one billion USD, according to media reports on July 23, just a week before the elections.