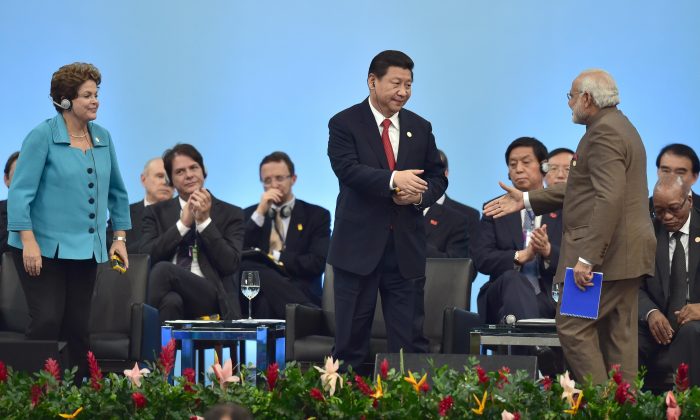 Modi to Face Xi Jinping on a Stronger Political Turf

NEW DELHI, India—When Chinese leader Xi Jinping visits India next week, Narendra Modi will welcome him as the head of the most stable Indian government in the last three decades, and with a foreign policy that is more robust than any other Indian government.

“One positive aspect of Modi’s government is that it has strong [political] mandate cutting across all regions and sections of [Indian] society. So it should help Narendra Modi to stir Indian policy vis-a-vis great power, China and other neighbors in a more pro-active, constructive, and positive mode,” said Dr. K. Warikoo, professor at the School of International Studies at Jawaharlal Nehru University in New Delhi.

India and China share a long border from India’s northeast, along the Himalayas all the way down to Nepal.

Previous Indian Prime Minister, Manmohan Singh, signed the Border Defence Cooperation Agreement with China last year, an agreement that set protocol in the region to minimize the risk of conflict.

However, since then, India has faced many incursions by the Chinese army in its north Ladakh region, a matter of serious concern for the Modi government.

Upon coming to power, Modi’s government decided to fast-track the construction of strategic roads on the border and give the green light to defense projects key to the Indian army.

According to Warikoo, to consolidate its borders with China, India should strengthen its settlers along the border.

“Once we provide sustainable infrastructure for proper placement of these herdsmen so that they are not disturbed, they are lured to stay there,” said Warikoo.
“It’ll be another factor in pushing out the possible or potential incursions into our side.”

“As much as we are working, they are also working to have good decisions announced during this high-profile visit,” she said, according to Zee News.

Sitharaman visited Beijing in June this year and signed a Memorandum of Understanding to set up Chinese industrial parks in India. A host of goods will be manufactured and exported from these industrial parks, a strategy to fill the US $8.84 billion trade deficit India already racked up in the first three months this year, according to Daily News and Analysis India (DNA India).

“Both India and China, with its growing population, has shifted the focus from its previous ideological orientations to a more aggressive economic orientated foreign policy,” said William Nunes, a Gujarat based foreign policy analyst.

Modi is not new to China relations. As the Chief Minister of the Indian state of Gujarat, Modi visited China four times and brought huge Chinese investment to his state.

“Realist, which supports economic openness and integration with the international market forces, while the revivalist take a more regional perspective, which is essential for the stability of the region,” Nunes said.

Other than the industrial parks, India and China are also in talks about investment and expertise to modernize India’s railways.