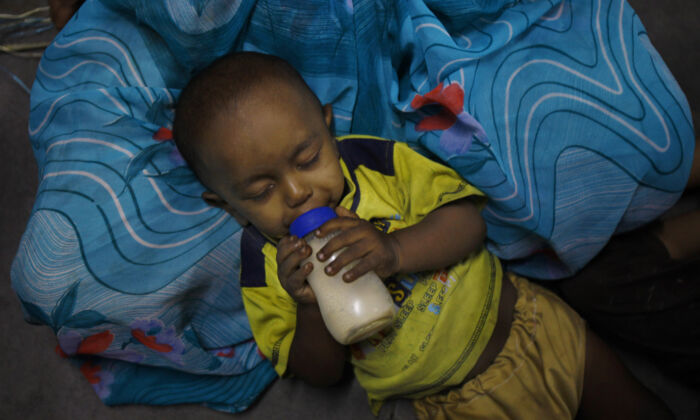 JAIPUR, India—The government of Prime Minister Narendra Modi is coming under fire from various quarters over India slipping to near the bottom of the Global Hunger Index in 2021, despite having huge food stocks.

India ranks 101st out of the 116 countries in the 2021 Global Hunger Index (GHI) report, which puts the second-most-populous nation behind its neighbors Sri Lanka, Nepal, Bangladesh, and Pakistan. In 2020, it was No. 94.

The index is a peer-reviewed annual report, jointly published by Concern Worldwide and Welthungerhilfe, that’s designed to comprehensively measure and track hunger at global, regional, and national levels. The publishers say that the index seeks to trigger action to reduce hunger around the world.

“With a score of 27.5, India has a level of hunger that is serious,” the publishers say in the report.

GHI scores are calculated each year to assess progress and setbacks in combating hunger.

India’s government has strongly condemned the methodology adopted by the institutions.

“It is shocking to find that the Global Hunger Report 2021 has lowered the rank of India on the based on Food and Agriculture Organization (FAO) estimate on the proportion of the undernourished population, which is found to be devoid of ground reality and facts, and suffers from serious methodological issues,” India’s Ministry of Women and Child Development said in taking an aggressive stance against the report.

“The publishing agencies of the Global Hunger Report, Concern Worldwide and Welthungerhilfe, have not done their due diligence before releasing the report,” the ministry stated.

“The methodology used by FAO is unscientific.”

However, professor Arun Kumar, a retired professor of economics at one of India’s prestigious universities—Jawaharlal Nehru University (JNU)—said that questioning the methodology is wrong since the same system also is being used to rate other countries.

“These huge stocks are three times the average stocks required to be held for various purposes. Excess stocks are not just a result of excess production but also a lack of purchasing power with the poor. That is why there is malnourishment among women and children [up to 40 percent are malnourished],” he said.

He pointed out that under the Right to Food in India’s constitution, cheap food is provided and yet there is malnourishment. It shows that the situation remains grim for the poor.

Kumar says the problem has worsened since 2016 because of demonetization.

“This was further aggravated by the structurally flawed GST (goods and services tax) and its poor design and implementation,” Kumar said.

GST was implemented in India in the latter half of 2017.

“All this points to the persisting hunger, despite the massive stocks of food, which are partly rotting,” Kumar said.

The opposition Indian National Congress (INC), commonly known as the Congress Party, criticized the Modi government on the issue.

Godi Media is a term coined by India’s opposition parties for the media outlets that publicly support Modi.