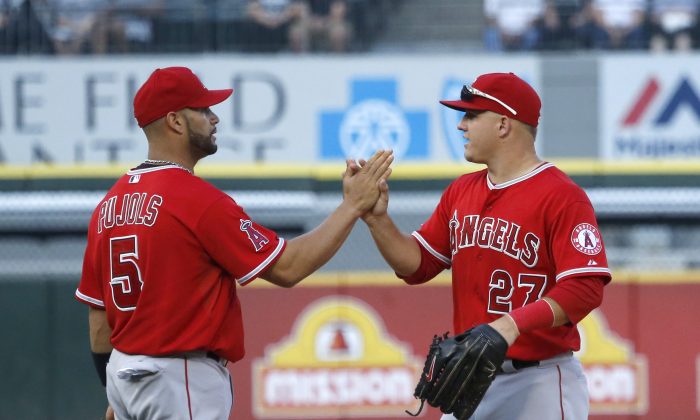 This week, to no surprise, many of the teams featured on the Power Rankings also have a number of representatives at the Midsummer Classic. A number of teams in the West continue to be the powerhouse of the major leagues. The “second half” of the season will be underway at the end of the week and the postseason picture will get clearer with each passing week.

The Athletics continue to be the best team in the league. The Los Angeles Angels have the second best record in the league and they are closely behind the A’s so the additions of Samardzija and Hammel will be crucial in their run at winning the division. The A’s won five of eight heading into the break and are expected to keep up this success. If they can maintain it, the division will easily be theirs as they remain a constant superpower with the minimal budget.

The Oakland A’s have five representatives at the All-Star Game. The players are third baseman Josh Donaldson, pitcher Scott Kazmir, pitcher Sean Doolittle, catcher Derek Norris, first baseman Brandon Moss and outfielder Yoenis Cespedes. Acquired pitcher Jeff Samardzija is considered an All-Star but because he went from the National League to the American League, he is ineligible for the Midsummer Classic.

The Los Angeles Angels have two representatives at the All-Star Game. The players are outfielder Mike Trout and shortstop Erick Aybar.

The good times keep going for the National League West-leading Los Angeles Dodgers. The Dodgers would win four out of the seven games heading into the All-Star break and have a control on the West over the San Francisco Giants with a one-game lead. They will need a strong second half to maintain their hold.

The Detroit Tigers have created a sizable 6.5 game lead in the Central division, the biggest lead in any division. It helps that the Tigers took three out of four over the second place Kansas City Royals. The Tigers snapped their three-game losing streak this week with five games in a row and finished the first half of the season on a strong note. The Tigers experienced offensive powerhouse wins and pitching duel wins. If they can win at that rate, the division will be theirs.

The St. Louis Cardinals are just one game behind of the Milwaukee Brewers but the Brewers have been struggling of late while the Cardinals have been rising up in an attempt to reclaim the division. The Cardinals were dealt a big blow as their positional leader, catcher Yadier Molina, went down with an injury that will sideline him for 8-12 weeks. If the Cardinals cannot maintain striking distance during Molina’s absence, the division and postseason baseball will be lost to the redbirds.

The Washington Nationals are ahead of the Atlanta Braves by just percentage points. The second half will be a very hard fought, close affair. The Washington Nationals won four out of seven heading into the break. Bryce Harper recently returned to the team and could be a big part of any attempts to contend for the remainder of the season. Jordan Zimmermann suffered an injury that could slow the Nationals down but it doesn’t appear to be a long-term injury so he could still be a big part of their attempts at contention.

The Washington Nationals have two representatives at the All-Star Game. The players are pitcher Jordan Zimmermann and pitcher Tyler Clippard.

While the Milwaukee Brewers are the leaders of the National League Central division, the lead is not what it once was and of all the divisions, the Central has the most tightly contested one, with three teams within four games of the leader. The Milwaukee Brewers stumbled into the much-needed break as they lost seven of their last eight games. The Brewers managed to keep the Cardinals away for the moment with that last win before the break. The Brewers were once a shocking team to see atop a division and maybe this could be the Brewers coming back to earth. The second half will be huge for the Brew crew if they intend to complete the shock and win the division.

The San Francisco Giants have been spiraling downward as they are now in a tie for one of the two Wild Card spots after having a strong hold on the West division. The Giants lost three out of four in their crosstown rivalry with the Oakland Athletics but they were able to finish on a relatively good note by taking two out of three in their division by defeating the Arizona Diamondbacks. The Giants may need to make an acquisition before the trade deadline at the end of the month and hope the newcomer will have a spark plug-like impact that Hunter Pence once did for them and Carlos Beltran did as well.

The Atlanta Braves are one game behind the Washington Nationals in the loss column. Following winning streaks with losing streaks is not what you want. After a season-high nine game winning streak, the Braves would go on a four-game losing streak. The Braves would finish winning three out of the last four heading into the break but they will need to piece together more positive consistency, preferably in division, to reclaim their place atop the division.

The Baltimore Orioles are the team in the American League East that has come away with the least injuries. Besides losing Matt Wieters for the season and Ubaldo Jimenez recently, the Orioles have not lost many of their key pieces. Despite the struggles with his batting average, Chris Davis has reinforcements in the form of Nelson Cruz and Adam Jones. The two outfielders are having very good seasons. Cruz is likely going to cash-in on his one year deal and Adam Jones continues to move up in the league, looking to make a name for him in a normally highly competitive division.