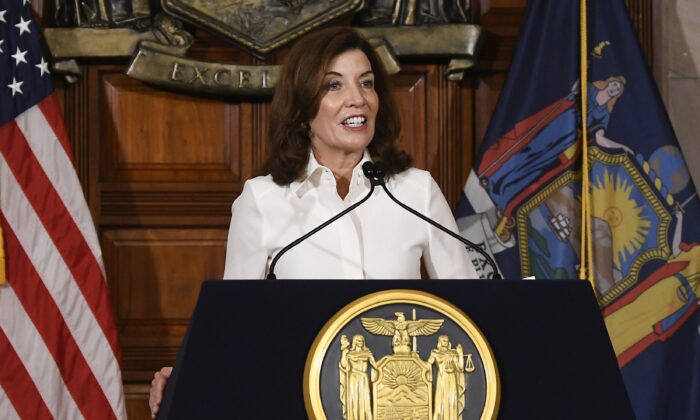 New York’s governor said on Wednesday that the state will look for workers abroad to substitute for employees at hospitals and nursing homes who are unvaccinated against COVID-19.

Health care and nursing home workers in New York state can possibly lose their jobs if they do not comply with the COVID-19 vaccine mandate imposed on them by former Gov. Andrew Cuomo and taking effect on Sept. 27.

“We also have state individuals that are trained to be helpful,” she added.

Another option outlined by Hochul is to find substitute employees who would be hired from other countries.

“We’re also reaching out to the Department of State to find out about visas for foreign workers on a limited basis to bring more nurses over here,” Hochul said.

The governor blamed those who refused the COVID-19 vaccine for the current situation.

“People who will not get vaccinated are the only reason that this country, and these communities, and our cities have not been able to be fully engaged in a state of normalcy,” Hochul said.

The vaccine mandate was introduced by Cuomo in mid-August with a goal to halt the spread of the CCP (Chinese Communist Party) virus, especially its Delta variant, according to a statement.

Then-New York State Health Commissioner Dr. Howard Zucker said at that time in the statement, “The data and science tell us that getting more people vaccinated as quickly as possible is the best way to keep people safe, prevent further mutations, and enable us to resume our daily routines.”

“This mandate will both help close the vaccination gap and reduce the spread of the Delta variant,” Zucker added.

A federal judge temporarily blocked the state of New York on Sept. 14 from forcing medical workers to be vaccinated after a group of 17 health professionals, including doctors and nurses, filed a lawsuit against the state. The plaintiffs claimed that their constitutional rights were violated because the state’s mandate disallowed religious exemptions.

The restraining order is valid until Oct. 12.