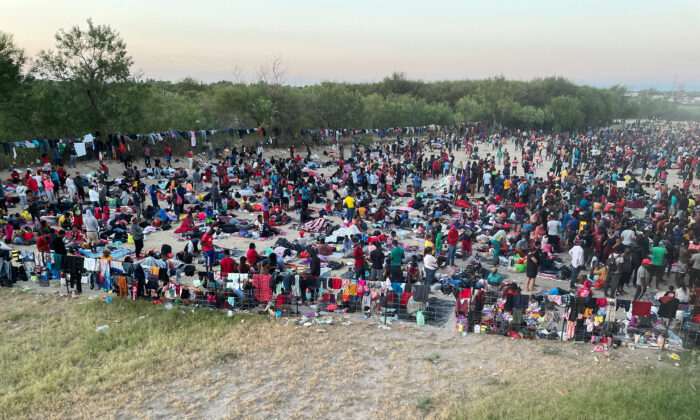 Does the Biden administration want to foment a civil war, a mass taxpayer rebellion, or is it simply crazy?

Those were the thoughts that flew through my head like the swallows to Capistrano the minute I read the Oct. 28 report in The Wall Street Journal under the headline “U.S. in Talks to Pay Hundreds of Millions to Families Separated at Border.” Needless to say, it’s currently their most-read article.

“WASHINGTON—The Biden administration is in talks to offer immigrant families that were separated during the Trump administration around $450,000 a person in compensation, according to people familiar with the matter, as several agencies work to resolve lawsuits filed on behalf of parents and children who say the government subjected them to lasting psychological trauma.

“The U.S. Departments of Justice, Homeland Security, and Health and Human Services are considering payments that could amount to close to $1 million a family, though the final numbers could shift, the people familiar with the matter said.”

$450,000 a person? This is when millions of actual taxpaying U.S. citizens are suffering, barely able to make ends meet during the pandemic, and inflation is on a record pace. Not even Dr. Anthony Fauci, allegedly the highest-paid U.S. government official, makes that much, at least in salary.

And I thought nothing could top the Afghanistan debacle.

For once, well twice—the first time was during the Kavanaugh hearings—I found myself in complete agreement with Lindsey Graham, who tweeted

I just about fell out of my chair when I read this.

For the sake of our country, I hope this reporting is in error.

To put it mildly. Rep. Doug Lamborn pointed out that $450,000 is more than the 9/11 victim’s fund—and this new proposal is for people who entered our country completely illegally.

Can you imagine how many more are now making a beeline for our open border after hearing about this incredible largesse?

If you want to get some laughs, or maybe vengeance, take a look at the comments section on the Daily Mail’s coverage of the story that ranges from “I’m a Democrat and this is the dumbest thing I ever heard” to Sen. Tom Cotton (R-Ark.) tweeting, “It’s unthinkable to pay a burglar who broke into your home for the ‘psychological trauma’ they endured during the crime.”

Well, maybe that’s not funny. In fact, the whole thing isn’t very funny, when you think about it. Joe Biden is actually the president of the United States, the supposed leader of the free world. And we’re theoretically stuck with him until 2024.

And now this strange, befuddled individual is in Glasgow, Scotland, pretending to understand climate science. Good luck to those of us who want to have heated homes this winter.

The only one who should be pleased by all this is James Buchanan, previously thought of as the worst president of all time for his role in preserving slavery, who must be sitting up in his grave, smiling in relief.

Of course, what appeared in the WSJ might be some kind of “trial balloon” number meant to be negotiated down to a still ridiculous $300,000 per person/ $600,000 per family, figures that still dwarf the $1,200 or so given to our own people at the height of the pandemic.

(That reporters allow themselves to be used for this game by authorities would be no surprise since it’s consistent with the behavior of the entire mainstream media in recent years, acting as a slavish adjunct of government. Hence, the phrase “people familiar with the matter,” as used here, has become something of a modern cliché.)

The American Civil Liberties Union (ACLU)—a once-honorable (decades ago) organization that at one time actually worked for Americans’ civil liberties but now works to undermine them at every turn—is apparently one of the main sponsors of this proposal.

The organization should consider changing its name to the American Republic Destruction Union (ARDU), with the slogan “Ben Franklin was right. We can’t keep it!”

Of final note, The New York Times doesn’t have this astounding story on its front page this morning. Has shame finally set in? Or is it just the old game of hiding the bad news?

Whatever it is, this is bad news indeed for Biden and the Democrats as well. They’ve not just jumped the shark, as they used to say in show biz. They’ve jumped a thousand of them. This isn’t going to sit well with most decent Americans. And we shouldn’t let them forget.