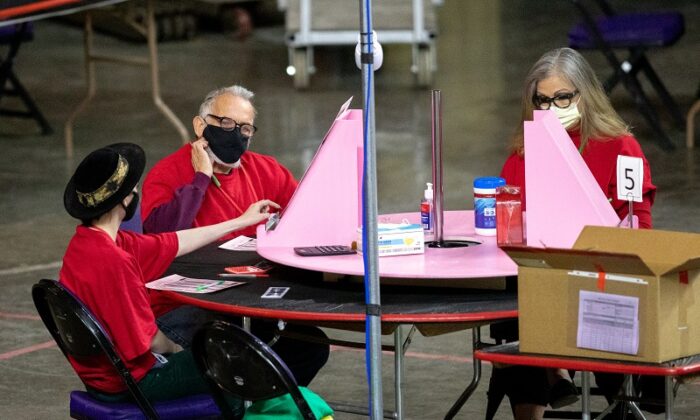 Contractors working for Cyber Ninjas, which was hired by the Arizona State Senate, examine and recount ballots from the 2020 general election at Veterans Memorial Coliseum in Phoenix, Ariz., on May 1, 2021. (Courtney Pedroza/Getty Images)
Viewpoints

America at the Precipice

What if the Maricopa County recount currently underway and nearing its conclusion shows that Donald Trump won the 2020 presidential election in Arizona?

No doubt the left will immediately deny the veracity of those results, but millions of others are going to nod their heads at what they will accept as genuine proof of something they already seriously suspected.

Other swing states will undoubtedly follow Arizona’s lead and demand recounts of their own, if they haven’t already launched them. What if they get similar results?

This turn of events will be far more than that cliché “a game-changer.” It will be “a country-changer.”

And all this may even have occurred without Dominion allowing others to have the password to their machines. What if they had?

So where will we be?

Most of us may try to ignore it and go about our lives, but America is at the precipice.

If you think things are bad at this moment in our history, if you think relations between the two halves of our country are strained now, just wait.

We can only hope the situation will be resolved without escalating the violence we already see on a regular basis in places such as Portland, Seattle, and Minneapolis, not to mention on so many of our urban streets where gangs are shooting each other, accidentally murdering 3-year-olds in the process, and angry sociopaths take pokes at random pedestrians because of their skin color or political beliefs, sometimes proudly recording the event on video while paying no mind to the police, who have virtually vanished anyway.

How can an escalation of this already horrendous state of affairs be prevented? Who or what will be responsible for adjudicating what we may well have to deal with in our country so that some form of calm prevails and there is a resolution?

Normally, one would turn to the Department of Justice, but the record of that crucial organ of our government over the past few years is nothing short of, well, horrendous as well. You don’t have to read the Horowitz report to understand that. Or even know how to spell Papadopoulos.

What about the Supreme Court? Well, so far—perhaps for fear of court-packing—they have been reluctant to examine the election in even a perfunctory manner.

Pillow man Mike Lindell thinks the Supremes will be persuaded (unanimously) by the evidence he has marshaled for his video “Absolutely 9-0,” but I wonder if they could be persuaded to act even if the CEO of Dominion and the head of the Chinese Ministry of State Security were to testify to a conspiracy simultaneously.

As for our political class, some of them talk the talk but how many would be willing to walk the walk if the situation evolves the way it may? If past performance is any indication, not many.

And don’t even get me started on the military that has morphed into an adjunct of the social justice club of Bennington College. (How Xi Jinping must be chortling.)

Nevertheless, the situation is evolving. Real Clear Investigations reported June 8 on developments in Georgia that are highly incriminating—Biden ballots that look photocopied.

I met the man leading the investigation in Georgia, Garland Favorito of VoterGA, when I was in Atlanta covering the campaign. I could be wrong—I have been before—but he impressed me as that rarity, a truly honest man, just the kind of person you want to be doing this … and he didn’t vote for Trump.

So what do we do if it all comes up the way it might?

Some see violence as inevitable. I try not to. Several days a week, on my way to exercise at the gym or play tennis, I pass a plaque marking the location of the Battle of Nashville. Now a golf course, this was where the Confederacy lost the Western front to the Union, with some 6,000 casualties overall for both sides, not to mention thousands wounded, according to one report. And then there was Antietam and all the rest.

Who would want that to happen again?

So again, what do we do?

Maybe take a page from the leftist playbook and start marching—everywhere you can and as much as you can. “¡El pueblo unido, jamás será vencido!” The people united will never be defeated can be seen as another way of saying “We the People …”

“We the People.” I like the sound of that. Make sure you have a good pair of shoes.