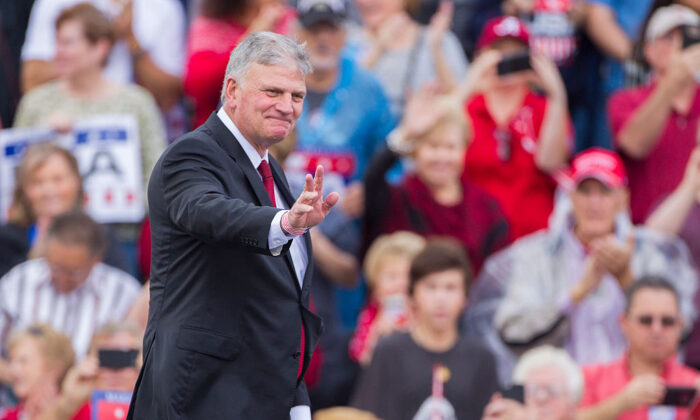 Evangelist and CEO of the Billy Graham Evangelistic Association Franklin Graham takes the stage before president-elect Donald Trump during a thank you rally in Ladd-Peebles Stadium in Mobile, Ala., on Dec. 17, 2016. (Mark Wallheiser/Getty Images)
Donald Trump

Evangelist Franklin Graham has defended Donald Trump’s legacy after Forbes reported that the former president’s wealth fell by nearly a third during his four years in the White House.

Forbes reported last week that Trump’s wealth dropped to $2.4 billion from $3.5 billion during his presidency and that he fell nearly 300 spots on the magazine’s billionaire rankings. The magazine attributed the drop in wealth to Trump’s refusal to divest his portfolio when he took office in 2017.

Trump had “bogged down his presidency with ethics issues for years, while also missing a chance to cash in on a market boom he helped propel,” the Forbes report stated.

Graham, who has been a vocal defender of the former president, defended Trump over the news, saying that his wealth declined because he put “America first, not his own interests.”

“President Trump did not even take a salary when he was serving as president—he gave it all back. So many politicians leave office with far more money than when they came into office,” Graham wrote in a statement in response to the Forbes article.

“This report says President Trump also dropped about $1 billion in wealth during those four years while he served. Donald Trump became president not to make money or to put his hand in the till, but to do his best to preserve the great things about this nation for future generations.

“He put America first, not his own interests. I’ve never seen anyone work harder.”

Trump’s business holdings and financial activities through his business career were the subject of widespread scrutiny from his political opponents during his presidency as they sought to impeach the former president. He faced multiple allegations that he had violated the Foreign Emoluments Clause of the U.S. Constitution, which prevents any “person holding any Office of Profit or Trust under them” from accepting “any present, Emolument, Office, or Title … from any King, Prince, or foreign State.”

Two of the cases were thrown out by the Supreme Court in January on the grounds that the cases became moot after Trump left office.

Graham is the son of the late Rev. Billy Graham, a prominent evangelical Christian figure. He previously defended Trump during the former president’s effort to question election results and has been vocal about the need to protect election integrity.