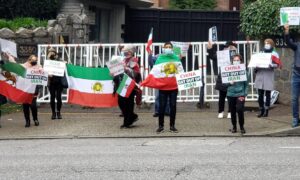 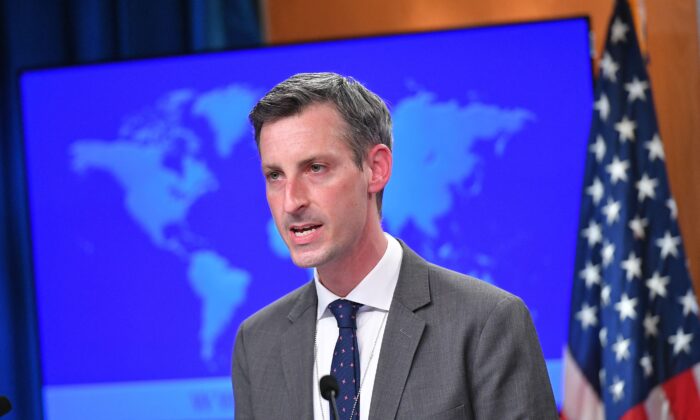 U.S. State Department spokesman Ned Price speaks ahead of an address by Secretary of State Antony Blinken during the release of the "2020 Country Reports on Human Rights Practices," at the State Department in Washington on March 30, 2021. (Mandel Ngan/POOL/AFP via Getty Images)
US News

The U.S. State Department reiterated on April 7 that the Biden administration won’t offer unilateral incentives to get Iran back to the negotiating table on the 2015 Joint Comprehensive Plan of Action (JCPOA)—known commonly as the Iran nuclear deal—which former President Donald Trump withdrew from in 2018.

“We are not and will not offer any unilateral gestures or incentives to sweeten any sort of deal or to induce Iran to—back to the negotiating table or to a better position at that negotiating table,” State Department spokesman Ned Price told reporters on April 7.

Price was referring to the deal between Iran and six major powers under which Tehran agreed to limit its nuclear program in return for the easing of U.S. and other economic sanctions.

The deal made it harder for Iran’s atomic program to be used to produce nuclear weapons, an ambition Tehran denies. Trump pulled the United States out of the deal in 2018 and reimposed sanctions on Iran, saying at the time that America would “not be held hostage to nuclear blackmail.” He called it “a horrible one-sided deal” that is “defective at its core.”

That prompted Tehran to begin openly violating the deal’s nuclear restrictions about a year later.

Price echoed his remarks from last month, in which he suggested Washington would consider each side taking steps to resume compliance with the agreement once they’re at the negotiating table.

“If the Iranians are under the impression that, absent any movement on their part to resume full compliance with the [nuclear deal], that we will offer favors or unilateral gestures, well that’s a misimpression,” he had told reporters.

“If and only if Tehran comes to the negotiating table would we be in a position, would we be prepared, to discuss proposals that would help push both sides back on that path of mutual compliance to the deal.

“Ultimately, that is where we seek to go: compliance for compliance.”

They described it as a “severely flawed agreement that undermines our national security interests due to its arbitrary sunsets and limited scope.”

“Unfortunately, recent comments from Administration officials suggest that is exactly what the U.S. intends to offer Tehran,” they wrote.

“We urge your Administration to reset its approach immediately. Members of Congress rejected the JCPOA on a bipartisan basis in 2015,” they wrote. “Returning to the JCPOA is not a recipe for a sustainable Iran policy, and will not protect U.S. national security interests.”

Separately, former Secretary of State Mike Pompeo last month warned that the United States and the Middle East would be made less secure by rejoining the 2015 nuclear accord.

White House press secretary Jen Psaki told reporters on April 6 that “a diplomatic path is the right path forward, and there are benefits to all sides.”