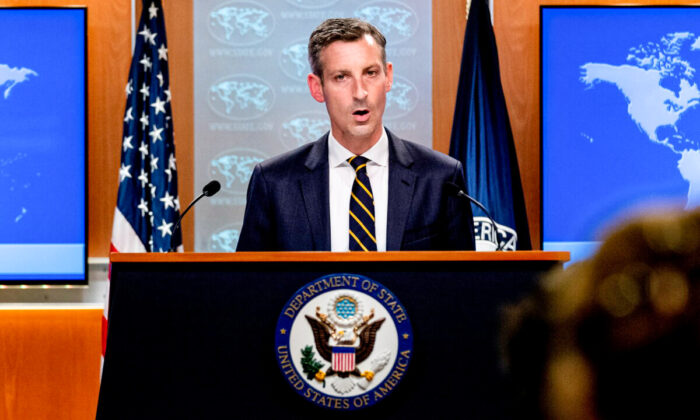 State Department spokesman Ned Price speaks on the situation in Afghanistan at the State Department in Washington, DC, U.S. on Aug. 18, 2021. (Andrew Harnik/Pool via Reuters)
Africa

US Suspends $700 Million in Aid to Sudan After Military Takeover

The U.S. State Department on Monday paused $700 million in emergency aid to Sudan that was intended to support the country’s democratic transition, after members of Sudan’s military ousted the civilian-led transitional government.

“The civilian-led transitional government should be immediately restored and represents the will of the people,” State Department spokesman Ned Price said during a press briefing. “In light of these developments, the United States is pausing assistance from the $700 million in emergency assistance appropriations of economic support funds for Sudan.”

Price told reporters that the sum was appropriated by Congress to support Sudan’s democratic transition after the ouster of long-ruling autocrat Omar al-Bashir in a popular uprising two years ago. He added that none of the $700 million had been transferred and so the entire sum had been suspended.

“We are pausing that full amount,” Price said, adding that further aid could be at risk if military leaders do not restore the civilian government.

“We are very much standing with the people of Sudan,” he continued. “The people of Sudan have made clear their aspirations for the continuation of transition to democracy and we will continue to support that including, if needed, by holding accountable those responsible for these anti-democratic actions.”

He also called on militants to “refrain from any violence against protesters,” as reports emerged seven people were killed by gunfire and 140 injured in clashes between soldiers and street protesters.

The head of Sudan’s ruling council, Gen. Abdel Fattah Abdelrahman al-Burhan, announced a countrywide state of emergency on Oct. 25 and dissolved the military–civilian Sovereign Council that had been established to guide the country to democracy following the overthrow of al-Bashir, who ruled the country for nearly 30 years.

In announcing the state of emergency, al-Burhan cited the armed forces’ need to protect safety and security. He promised to hold elections in July 2023 and hand over to an elected civilian government then.

“What the country is going through now is a real threat and danger to the dreams of the youth and the hopes of the nation,” he said.

The Sudan information ministry, which is still loyal to ousted Prime Minister Abdalla Hamdok, said on its Facebook page that the transitional constitution gives only the prime minister the right to declare a state of emergency and that the military’s actions are a crime. Hamdok is still the legitimate transitional authority, it said.

“We firmly reject the dissolution of the civilian-led transitional government and its associated institutions and call for their immediate restoration. The arrest of Prime Minister Hamdok and other civilian leaders is unacceptable,” Secretary of State Anthony Blinken said in a statement. “The military forces must ensure their safety and release them immediately. These actions have the potential to derail the country’s transition to democracy and are a betrayal of Sudan’s peaceful revolution.”

The U.N. Security Council is scheduled to meet on Tuesday afternoon for an emergency meeting on the matter.

The United States is under U.S. law obliged to suspend most economic support to nations where civilian leaders are ousted by the military, AFP reported.

The United States Agency for International Development (USAID) said in a statement on Monday that its humanitarian assistance for people in need in Sudan, which exceeded $386 million in fiscal year 2021, will continue.

“The United States stands with the Sudanese people, who continue to reject military rule. We call for the safety and immediate release of political detainees, restoration of the civilian-led transitional government and its associated institutions, and resumption of Internet and telecommunications services,” the statement said.

“Sudanese security forces use of live rounds against ongoing protests in Khartoum are deeply disturbing. We demand that Sudan’s security forces refrain from any further violence against protesters and hold to account those responsible.”