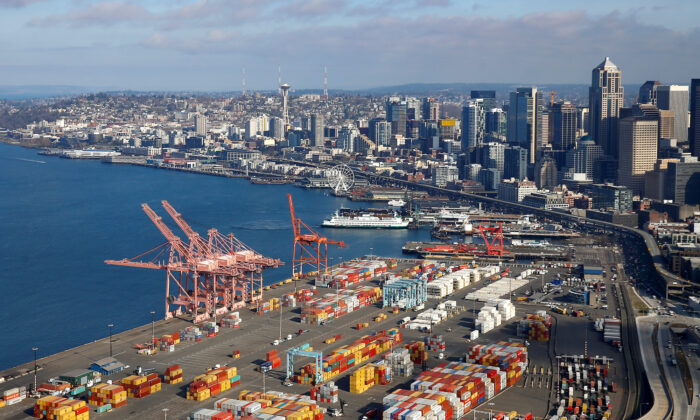 Shipping containers at the Port of Seattle and the Elliott Bay waterfront in Seattle on March 21, 2019. (Reuters/Lindsey Wasson)
Markets

U.S. orders of durable goods—products designed to last at least three years—fell in September after four consecutive months of increases, driven by a sharp drop in transportation equipment orders.

The drop followed a 1.3 percent rise in August, which was the fourth consecutive increase in the measure. The decrease was driven by a 2.3 percent drop in new orders of transportation equipment, which in September fell $1.8 billion to $77.7 billion. Excluding transportation, new orders rose 0.4 percent.

“Despite some weaknesses in the transportation equipment sector, the durable goods data continue to reflect a strong upward trend overall, even as manufacturers struggle with supply chain bottlenecks, worker shortages and soaring costs,” Chad Moutray, chief economist for the National Association of Manufacturers, said in a tweet.

Core capital goods shipments rose 1.4 percent in September to $75.9 billion, an all-time high and an increase of 13.7 percent over the year.

“Even with sizable challenges, manufacturers remain upbeat in their assessments of the coming months, and these data are consistent with that, especially the phenomenal growth year to date and the new records set for core capital goods spending and shipments,” Moutray said.

Demand strengthened in September for machinery, up 1.1 percent, fabricated metal products, up 0.7 percent, and primary metals, up 0.6 percent.

Overall, durable goods orders shot up 23.4 percent on a year-on-year basis, boosting manufacturing, which accounts for around 12 percent of the U.S. economy.

Still, shortages of labor and raw materials made it harder for factories to fulfill orders. Unfilled orders rose 0.7 percent in September, after advancing 0.9 percent in August.