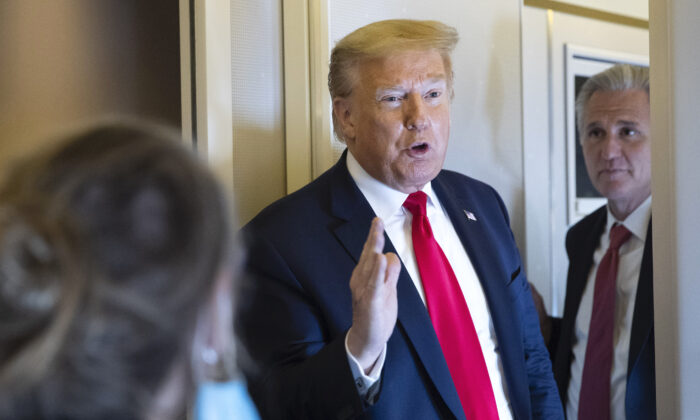 President Donald Trump, with House Minority Leader Kevin McCarthy (R-Calif.), speaks with reporters while in air en route to Andrews Air Force Base in flight on May 30, 2020. (Alex Brandon/AP Photo)
US News

“We’re not going to federalize the Guard at this time,” O’Brien told reporters at the White House on May 31. Governors and mayors should be the ones making decisions on law enforcement, he said.

O’Brien, meanwhile, told ABC News on May 31 that Trump stands in solidarity with “the peaceful protesters who are out demanding answers and petitioning their government about what happened.”

Trump is seeking to deescalate the violence and riots in various cities over the past several days, he said.

“I want to make a big distinction between peaceful protesters, these great Americans, and that’s the difference between our country and many of the authoritarian countries out there, when something like this happens, we investigate it. Our people protest. They petition their government for redress. And we stand with the protesters,” O’Brien said.

However, “violent ANTIFA radical militants” are coming across state lines and inciting violence “under cover of night,” he said, adding that they’re using military tactics to commit acts of arson.

“They’re especially targeting the most venerable parts of our cities, George. The minority section, the African-American sections and Hispanic areas and burning down businesses of people that are trying to get a leg up. … And we’re calling on the FBI to investigate Antifa and get to the bottom of these violent rioters. And I don’t want them confused with peaceful protesters that have every right to go out to the streets,” he said.

From Los Angeles to Miami to Chicago, protests marked by chants of “I can’t breathe”—a rallying cry echoing the dying words of George Floyd—began peacefully before turning unruly as demonstrators blocked traffic, set fires, and clashed with riot police, some firing tear gas and plastic bullets in an effort to restore order.

The sight of protesters flooding streets fueled a sense of crisis in the United States after weeks of lockdowns due to the CCP (Chinese Communist Party) virus pandemic, which has seen millions thrown out of work and has disproportionately affected minority communities.

Minnesota Gov. Tim Walz said the deployment was necessary because outside agitators were using protests over Floyd’s death to sow chaos.

“We are under assault,” Walz, a first-term Democratic governor, told a briefing on May 30. “Order needs to be restored.”