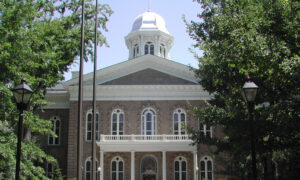 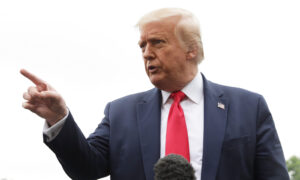 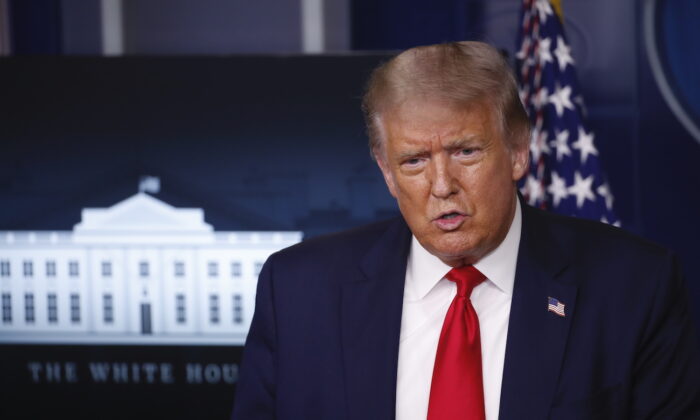 President Donald Trump speaks during a briefing with reporters at the White House in Washington, on Aug. 3, 2020. (Alex Brandon/AP Photo)
2020 Election

President Donald Trump on Monday said the election result in November could take “two months” to complete if universal mail-in voting is used.

Inauguration Day is about two-and-a-half months after November’s Election Day.

“It could be decided many months later,” Trump said. “Do you know why? Because lots of things will happen during that period of time. Especially when you have tight margins, lots of things can happen. There’s never been anything like this … Now, of course, right now we have to live with it, but we’re challenging it.”

Trump and Republicans have said mail-in voting could lead to ballot harvesting, allowing for dead people to vote, or allowing for people who have moved to fraudulently vote, as well as ballots being lost in the mail.

He was referencing lawsuits filed by the Republican National Committee to challenge some states over universal mail-in voting and similar issues.

On Monday, the president threatened legal action against a universal mail-in voting plan in Nevada.

“In an illegal late night coup, Nevada’s clubhouse Governor made it impossible for Republicans to win the state. Post Office could never handle the Traffic of Mail-In Votes without preparation. Using Covid to steal the state. See you in Court!” he wrote. He also alleged that the U.S. Postal Service could not handle the increase in mailed-in ballots.

Gov. Steve Sisolak, a Democrat, wrote that mail-in ballots are necessary because it “ensures protections for Nevadans to vote safely at the November election during the pandemic.”

“During this global pandemic, I made a commitment that we’d do all we can to allow Nevadans to safely cast a ballot in the upcoming November election,” he added.

“The comments made by President Trump and RNC Chairwoman Ronna McDaniel regarding Assembly Bill 4 are disgraceful and patently false,” Nevada Senate Majority Leader Nicole Cannizzaro and Assembly Speaker Jason Frierson said in a statement. “This is a clear fear-mongering attempt by the GOP to suppress voters this November as part of an effort to shield themselves from the backlash of a failed administration.”