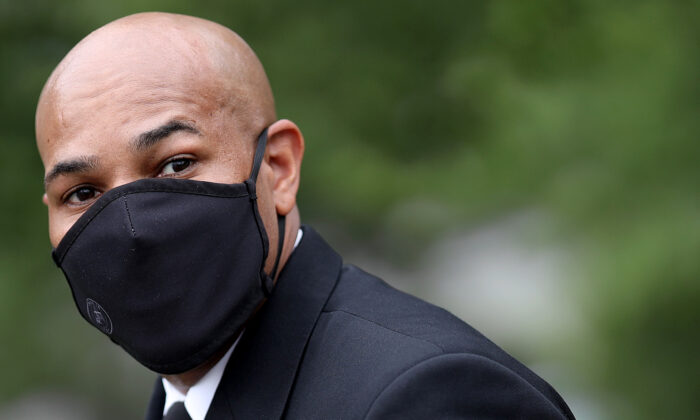 Surgeon General Jerome Adams walks to the West Wing of the White House after a television interview in Washington on July 7, 2020. (Win McNamee/Getty Images)
AMERICA

For months, American public health officials urged people not to buy masks. That guidance was abruptly reversed in April.

At that time, Adams said Sunday, health experts did not believe the CCP (Chinese Communist Party) virus was spreading from patients who weren’t showing symptoms.

“I was saying that then because everything we knew about coronaviruses before that point told us that people were not likely to spread when they were asymptomatic. So, the science at the time suggested that there was not a high degree of asymptomatic spread,” Adams said on CBS’s “Face the Nation.”

Officials were also worried about hoarding of personal protective equipment and a dearth of such equipment in some areas.

“But the primary reason was because that’s what the science said. And I want the American people to understand. We follow the science and when we learn more, our recommendations change,” Adams said.

“But it’s hard when people are continuing to talk about things from three, four months ago. I’ve said consistently for the past three months, ad nauseum on the Internet and in interviews, wear a face covering.”

Critics of mandates to wear masks often point to Adams’s proclamation and others like it to argue against having to wear face coverings.

The Centers for Disease Control and Prevention recommended earlier in the COVID-19 pandemic that only sick people and healthcare workers caring for sick people wear masks, explicitly stating no one else needed to wear them.

On April 3, the agency recommended people wear masks in places where social distancing measures are challenging to maintain, including grocery stores and pharmacies.

Since then, many counties and states have mandated wearing masks.

Adams told reporters when the new guidance was issued that earlier recommendations were “based on the best evidence available at the time.”

Officials said a group of studies showed the percent of patients infected with the new disease was higher than they thought. Researchers also found evidence of asymptomatic patients, or those without symptoms, still being able to spread the virus.

“We’ve learned more about asymptomatic spread. Up to 50 percent of people who can spread this disease, spread it without having symptoms,” Adams said on Sunday.