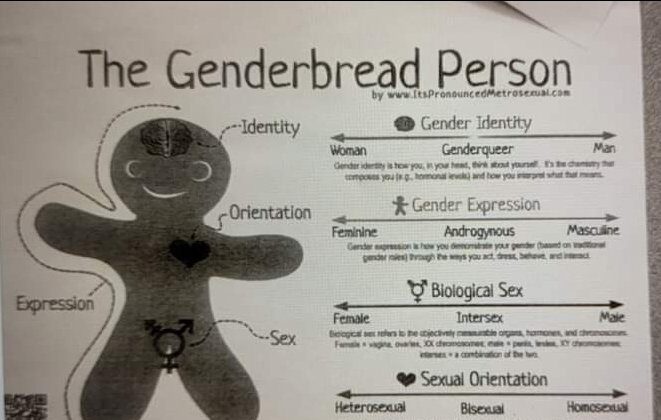 In a small, conservative town in North Dakota, 12-year-old Rebecca has faced unrelenting pressure from friends to announce an LGBT identity. It’s a pressure she doesn’t want or need, according to her mother, Sarah.

The two asked to have their full names withheld to prevent them from being identified, which, they fear, would exacerbate the problem.

Rebecca has helped care for a terminally ill relative, and wants to be a nurse one day, said Sarah. The middle-schooler values her friends and does great in school.

But a few years ago, she was sexually abused by another girl close to her in age, who made unwanted advances and touched her inappropriately, Sarah said. She feels Rebecca isn’t even old enough to mentally process the trauma she experienced.

Rebecca has experienced this pressure. And for some children, it might be easier to dismiss.

But for Rebecca, every time classmates pressure her to announce a non-heterosexual identity, it returns her trauma to the surface, her mother said.

And that’s harmful, she said.

“A fifth grader often still believes in Santa Claus,” Sanzi said. “They are just young, and usually the only reason they have mature topics on their minds is because adults have made it so that they have to think about these things.”

Under pressure from classmates who wanted her to join in on the trend, Rebecca got moody and depressed, she said. She started to physically attack her parents, because she was too immature to communicate her feelings in other ways, Sarah said.

One day, Rebecca started crying and begged her parents not to send her back to school anymore.

“The other girls that I’m around in school say that they’re gay or lesbian, and they are trying to force me to be like that, too,’” Rebecca confessed to Sarah.

The school, town, and state generally seem to espouse predominantly conservative values, Sarah said. But it’s no protection, because of the way LGBT ideology spreads to children over TikTok, she added. The messaging is prevalent on Facebook, Instagram, YouTube, and other popular social media platforms, as well.

“There’s no reason for any 12-year-old to be talking about their sex life or anything regarding that,” Sarah said. “It should be nonexistent” as a topic for children.

But experiences like Rebecca’s have become common for American youth, Sanzi said. Due to LGBT influences on social media platforms and in schools, children spend a lot of their time in spaces characterized by a focus on sexuality, she said.

“Schools have become blanketed in political messaging around the topic of LGBTQ,” Sanzi said. And the most concerning aspect of this focus on LGBT sexuality is the “T,” she added. She believes widespread encouragement of transgenderism in school endangers children.

And it’s troubling, she said, when a “safe space” means for girls that “biological males can come into my bathrooms, come into my locker room, sleep in the same room as me on an overnight field trip, and compete against me in sports.”

Increased focus on LGBT sexualities in schools also has led to increased pressure on peers to take on an LGBT lifestyle, Sanzi confirmed. This pressure, she added, hits girls especially hard.

Sanzi shared several stories parents told her of groups of girls that fell one after the other into LGBT identities.

“I talked to a dad who said that his daughter was quitting her travel team for soccer, because all the girls were suddenly identifying as some sort of sexual gender identity. And that the pressure on his daughter to do the same was so ridiculous.”

Often, children face pressure to become LGBT from a number of sources at once, said Sanzi. A child might hear about a gender identity online and have questions. Mentioning those to friends brings quick approval. Mentioning questions to some teachers or school counselors can lead to encouragement to assume new pronouns, Sanzi said.

“That’s why so many parents talk about how they feel so ganged up on,” she explained. “They’re like, ‘I went to the school. They were against me. I took my kid to a therapist. They work against me.’  Everyone is going along with what the parent feels like is a delusion.”

In Front of Children

Today, the LGBT ideology is the “religion” of American life,  said Delano Squires, life, religion, and family expert at The Heritage Foundation.

“We already live in a religious society,” Squires said. “The most dominant denomination right now is everything having to do with the LGBT community.”

Christianity should rule America’s “public square” because America’s government was built to run on Christian culture, Squires said. There’s no such thing as an empty public square.

“What a more Christianized public square would look like in this most immediate term would be to bend back some of the craziness that we’ve been riding for the last five to 10 years,” he said.

In contrast, the dominance of the “LGBT religion” has unleashed “a wave of confusion, particularly for young people,” he said.

He said he opposes “Drag Queen Conservatism,” the perspective that anyone should have the right to do anything in public.

“There’s always been a ‘closet’ in every society since the beginning of time,” Squires said. “Some things, people only do in the privacy of their homes.”

An America dominated by the public religion of the LGBT movement will face cultural cataclysm, he said. And a generation raised on this religion will experience immense suffering when their beliefs clash with reality.

“We’re going to have a generation of children who look back on this period of time with not just regret on a personal level, but intense anger, on a more systemic level, directed towards the adults who would not tell them ‘No,’” Squires said.

According to Sarah, the Internet means that every American shares the same public square.

“The kids are getting all their values and morals from social media,” she said.

Rebecca’s classmates see it as normal to discuss sexual orientation with fellow fifth graders, Sarah said. They often pressured Rebecca to declare an LGBT identity, and they showed her inappropriate media she was too ashamed to reveal to her mom. And Rebecca has refused to name the girls pressuring her.

So her mother suggested requesting a new lunchtime at school and proposed looking for other ways to avoid those children.

“Even if you do that, they’re gonna find a way to get to me,” Rebecca fretted. “They’re not going to leave me alone.”

Eventually, Rebecca told her classmates she was bisexual so they would stop bothering her, Sarah said.

“What about those kids that are similar to my daughter, who have had things forced upon them?” Sarah worries. “And now they’re all talking about sexuality like it’s supposed to be a part of a 12-year-old’s life.”

Sarah plans to work with the school to protect her daughter. Between classes and during breaks, the plan is for Rebecca to be allowed to listen to music on headphones, so she doesn’t have to hear talk of LGBT issues. She’ll eat lunch with a friend in the library, and she’ll attend special classes to help with emotional issues. The school also changed her schedule to help her avoid the girls who were pressuring her.

But the problem stretches far beyond the school hallways of North Dakota.

A student at Maine’s Gorham High School told The Epoch Times that he faces an overwhelming amount of pro-LGBT posters, pamphlets, school requirements, and pressure from students in his “public square.”

The student asked to be identified only as HB because he was worried about the repercussions of telling his story.

“It’s gotten to the point where it’s kind of annoying, because they’re plastering it all over their walls,” he said of the school’s pro-LGBT messaging, which includes “posters showing gender pronouns on how you should address one another.”

The Epoch Times reached out to Gorham High School, but did not receive a response.

Teachers at Gorham spotlight LGBT ideology to students in many ways, HB said.

“They showed us one video where they would have a bunch of teachers say their names, and some of them were mentioning their pronouns,” he said. “They do the same thing with papers, too. They ask you what your pronouns are.”

The school held a “Banned Books Week” where it handed out the “13 Reasons Why” to students, HB said. The book includes obscenities, such as a teenager stroking a girl under her underwear, and shares plans on how to commit suicide.

On impressionable high school students, this consistent focus has a huge effect, HB said. He estimated that about a third of his classmates strongly promote the use of preferred gender pronouns.

“You have to get their pronouns down and get them right, or they’re gonna be angry at you like it’s the end of the world,” HB said.

In person, however, the LGBT students tend to be less aggressive, he added. Even so, students often display outrage over the incorrect use of their preferred pronouns.

“Some of them just, like, go crazy about all the pronoun stuff. Like, I could hear them in class talking about it.”

HB thinks that announcing “preferred gender pronouns” is here to stay. He figures he’ll most likely enter adulthood in a world where employers, schools, and others demand his pronouns from him.

“I hope it’s just the trend and people will eventually get over it,” he said. “But with the amount of people that are doing it, it’s probably not going to be over for a little bit.”

Students who don’t believe in constantly announcing their pronouns have learned to cope with the madness, HB said.

“We’ve just lived our normal lives, and when we see all the crazy stuff happening around us, we just look at it and we laugh,” he said. “And then we just move on with our day. We act like it never happened.”