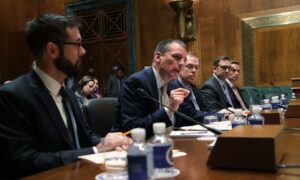 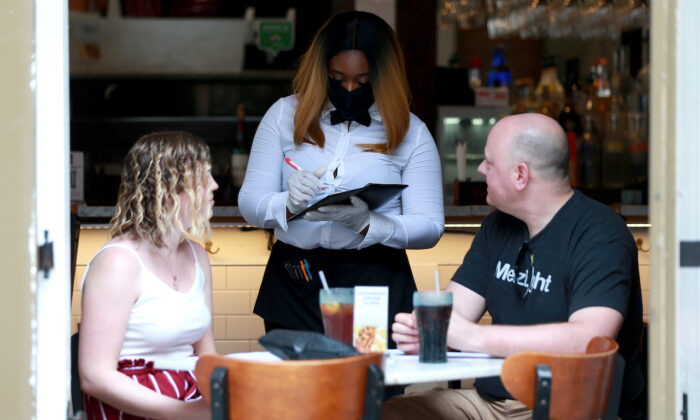 A waitress takes an order during lunch at Royal House Oyster Bar in New Orleans, La., on May 22, 2020. (Sean Gardner/Getty Images)
Politics

WASHINGTON—Some small businesses are nearing the end of their eight-week forgiveness window in the pandemic relief loan program, and are worried about having their loan forgiven.

The Paycheck Protection Program (PPP), which offers relief loans to small businesses, can be converted into grants. Businesses, however, have to spend funds within eight weeks starting the day they receive the loan to be able to qualify for loan forgiveness.

A new survey by the National Federation of Independent Business found that most small businesses are in the middle of that time frame and some are nearing the end of it.

For example, 7 percent of small businesses said that their eight-week period would end before June 8, and another 23 percent reported that they will hit the deadline before June 14.

Many small businesses are asking for an extension of this forgiveness period. The hardest-hit businesses such as restaurants, gyms, and movie theaters weren’t able to open up in the past two months to deploy the PPP funds.

The relief loans provided by the U.S. Small Business Administration (SBA) have a maturity of two years and an interest rate of 1 percent. They’re offered only to businesses with fewer than 500 workers.

The loans provide an incentive for small businesses to keep their employees on the payroll. The businesses will be able to use that money to pay the wages, rent, mortgage interest, and utilities.

The SBA stated it would fully forgive PPP loans, along with the interest, if at least 75 percent of the fund is used for payroll. Forgiveness is also based on maintaining salary levels.

On May 28, the House overwhelmingly approved a bill that adds flexibility to the $670 billion loan program.

The legislation would give small businesses more time to use the PPP funds by extending it to 24 weeks from eight weeks. In addition, the borrowers would have to spend 60 percent—rather than the current 75 percent—of the funds on payroll to qualify for loan forgiveness.

Under the current rules, small businesses have to rehire certain laid-off workers and restore their wages by June 30 to seek loan forgiveness. The new bill would also extend that deadline to Dec. 31. As of the time of writing, it’s unclear whether the Senate will approve the House bill, since Republican senators are divided over how to move forward.

“As communities begin the process of reopening, it is now clear that most small businesses will not be up and running at the end of the eight-week period,” Senate Small Business Committee Chairman Sen. Marco Rubio (R-Fla.) said during a hearing on June 3.

“I hope that we’ll be able to get that bill to the finish line within the next few days,” he said.

SBA announced that as of June 2, nearly 4.5 million PPP loans have been approved, totaling $510.3 billion.

According to the NFIB survey, 77 percent of small business owners had applied for a PPP loan, of which 93 percent had been approved.

The scale of the loan program and the take-up rate among small businesses suggest that the program has been successful, according to Michael Strain, director of economic policy studies at the American Enterprise Institute.

“PPP will likely be the main and most effective measure Congress has passed to address the pandemic,” he said during the Senate hearing.

“The 75 percent rule, which is not in the statute, is a mistake. It lessens the program’s effectiveness and allows the program to benefit some small businesses over others in an arbitrary fashion,” he told the committee.

“For example, a small business in a high-rent city will benefit less from PPP than businesses with lower rent payments as a share of overall expenses. Treasury justifies the rule by arguing that it keeps the focus of PPP on workers. But a business that cannot pay its rent will not be able to continue paying its workers.”

Speaking at the hearing, Connie Evans, president and CEO of the Association for Enterprise Opportunity, also urged Congress to prioritize underserved communities.

“While the SBA and Treasury work to correct the structural flaws, the damage is already beginning to set in for many overlooked businesses—particularly black and Latin-owned businesses,” she told the committee.

She asked Congress to provide additional PPP funding only for firms with 10 or fewer employees, to better help underserved businesses.