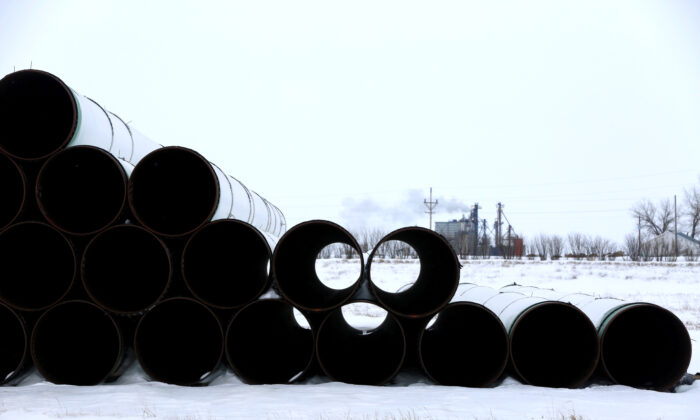 Sen. Mike Rounds (R-S.D.) criticized President Joe Biden’s revocation of the permit for the Keystone XL pipeline, saying the oil that would have traveled through the pipeline will go to China or another country or be shipped to the United States by rail, which Rounds said is less safe.

“Look, they’re going to pump the oil, and it’s going to go someplace. It’s too valuable not to, and we still need the oil. So, it’s either going to be shipped to other countries, including China, which has not the same type of environmental regulations that we have when it comes to the processing of that oil, or it could come back down into the United States to the specific locations where they actually know how to process it, to actually do that crude oil,” Rounds told Fox News in an interview aired on Jan. 23.

“This was the most efficient way to do it. It’s still going to get moved, but now they’re probably going to have to go to rail cars, and when you go to rail cars, it’s not as safe. And so, this was simply the most efficient way to move about 830,000 barrels of crude oil per day, that now will probably go either by rail or it’ll go to another country.”

Rounds said the decision will divert a lot of the oil onto rail cars, displacing grain shipments from his state. He also lamented the loss of 10,000 future jobs, including 2,000 Americans who were on the job when Biden signed the executive order gutting the project.

Keystone XL is the fourth phase of construction of the Keystone pipeline, which adds a branch connecting terminals in Hardisty, Alberta, and Steele City, Nebraska, through a shorter route using a larger diameter pipe.

It has drawn attention since environmentalists singled out the project as a symbol of the fight against fossil fuels and for natural preservation. After President Barack Obama temporarily delayed the project in 2015, President Donald Trump issued a presidential permit in 2017 to allow the project to go forward.

TC Energy Corp. is planning to eliminate more than 1,000 construction jobs related to the halt of the pipeline expansion project. According to the Association of Oil Pipe Lines’ CEO Andy Black, the move is tantamount to “killing 10,000 jobs and taking $2.2 billion in payroll out of workers’ pockets [and] is not what Americans need or want right now.”