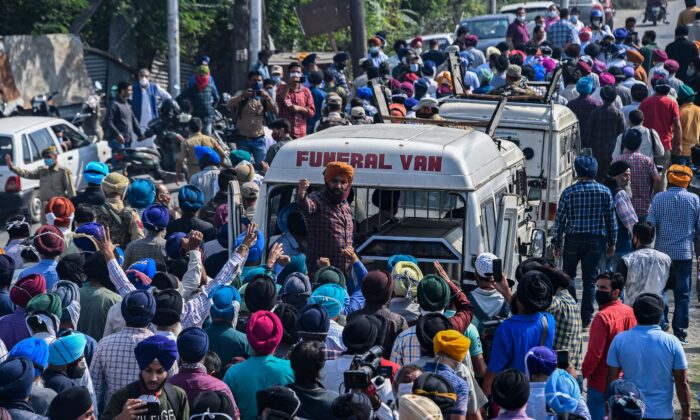 NEW DELHI—Eleven civilians have lost their lives in a fresh wave of targeted killings in the Indian union territory of Jammu and Kashmir since Oct. 5, causing the Indian administration and military to go on high alert in a region that shares a border with Pakistan.

The targeted killings of seven unsuspecting individuals from the Hindu minority community and four of the majority Muslim community include people from within Kashmir and five migrant workers from other parts of India. They were carried out by young men, in mostly a hit-and-run style.

Experts said the fresh wave of killings is suspected to be the work of a new local militant group called The Resistance Front (TRF), which is backed by Lashkar-e-Taiba (LeT). It is said to be unique in several ways and is aimed at creating a narrative war supporting further unrest, violence, and alienation and at leading to Muslim exclusivity for the region.

LeT is a Pakistan-based, Kashmir-focused outfit designated as terrorists by the U.N. Security Council and several countries including the United States, Australia, India, Canada, and the United Kingdom. According to the information classified by the Australian government, LeT earlier collaborated with the Haqqani Network, a Pakistan-based militant group associated with the Taliban.

Experts said in a geopolitically volatile region like Kashmir, the targeted killings will ensure that the pot keeps boiling and that no resolution is possible for the Kashmir problem that utilizes a major chunk of India’s defense budget. India and Pakistan have fought four wars over Kashmir since 1947.

Meanwhile, the Islamic State of Khorasan, an Afghan affiliate of the terror group Islamic State, in the 21st edition of its India mouthpiece “Voice of Hind” has warned of more attacks midst the targeted killings, according to India Today. Indian authorities have moved thousands of migrant workers to safer locations, and hundreds have fled the picturesque valley due to terror, according to Reuters.

Immediately preceding the killings, Pakistan had brought up the Kashmir issue at the UN General Assembly on Sept. 24, criticizing India’s attempt for a “final solution” for Kashmir.

Khan’s comments led to a diplomatic war of words between the two nations.  India exercised its right of reply on the next day and said Pakistan has the “largest number of terrorists proscribed by the UN Security Council.” This was followed by Pakistan again taking its turn to lambast India on the Kashmir issue.

More recently at the UN General Assembly’s Special Political and Decolonization (Fourth) Committee on Oct. 20, Pakistan termed India’s rule over Kashmir as the “worst manifestation of colonialism,” after which both the countries again had a verbal duel.

The Uniqueness of the Killings

Vicky Nanjappa, an Indian journalist who specializes in internal security said the boys carrying out the recent killings are unlike terrorists earlier operating in the region, who were hard-core militants and were profiled by the administration. Each of the 11 killings was done by different people, and this has created new challenges for Indian intelligence.

“In the absence of providing any concrete intelligence on who the killer exactly is, considering he’s committing an act of terror, you really don’t have intelligence. And that seems to be the new strategy,” said Nanjappa. This is the reason, he said, that Indian security personnel have rounded up so many terrorist sympathizers.

A week into the killings, the Indian administration arrested over 700 “terrorist sympathizers” according to the Indian broadcaster New Delhi Television.

“It’s gonna be a long investigation. Where are the funds coming from? From where was the pistol procured? You need to build up a case, and only then get to the bottom of it,” said Nanjappa.

This new strategy is a new psychological approach to terrorism. Most of those who commit such acts are indoctrinated ideologically and are expected to come back and commit more such acts. But with the recent targeted killings, this has changed, according to Nanjappa.

“If they’re not repeating these people, then it is clearly a payoff, it’s like a hit job which they have asked them to do, with a specific list in their hands, and so on,” he said.

Sunanda Vashisht, a political commentator from Kashmir’s minority Hindu community told The Epoch Times that the killings remind her of the late 1980s when the minorities faced similar targeted killings, which led to their mass exodus.

“That’s how they would identify them, they would put the hit lists everywhere, and then you knew; my own uncle was on a hit list,” said Houston-based Vashisht whose family had also to flee the violence then. She testified before a U.S. Congressional hearing on Human Rights organized by the Tom Lantos Human Rights Commission in Washington in November 2020.

Vashisht highlighted the case of two teachers, a female Sikh and a male Hindu whose identity cards were checked while a recon of the school was done before they were killed at point-blank on Oct. 7.

According to a 2008 report by the Internal Displacement Monitoring Center,  the mass exodus after 1989 included the displacement of 90 percent or 250,000 to 350,000 of Kashmiri Hindus, called the pandits, from Kashmir. Vashisht said the recent killings are aimed at threatening what she listed as “808 families who had not gone back” then.

This image will torment me forever. Virendra Paswan was in Kashmir valley to earn an honest living. Islamist Terrorists did not want him in Srinagar. Now his dead body also could not leave Kashmir. His death should not go in vain. pic.twitter.com/qjcb1TQ6lP

Vashisht said the militants want to counter the narrative of “normalcy” that the Indian government attempted to build up after the political reorganization of the state, which was intended to initiate development projects and invite investment.

“The narrative is you can’t bring any kind of change in Kashmir,” she said, adding that the perpetrators don’t want Kashmir’s integration with the rest of India.

Suneem Khan, a Kashmir-based columnist described the recent target killers as “locally bred pressure points” that are being activated and utilized to manufacture a tense minority-majority relationship countrywide and instill fear, particularly among non-Kashmiris.

It’s also to invite “reprisal from the state in terms of stringent security measures.”

This would further push the narrative among Indians of Kashmiris being “anti-India, anti-nationals, or anti-non-Muslims,” which Khan termed as “dubbing the entire population as theocratic or fascist.”

“This way, the distance between this region and the people of mainland India would widen more. And the pot would keep brewing more and more trouble. They will have more recruitments—they will be more local recruitments,” said Khan.

Aditya Gowdara Shivamurthy, an expert with Observer’s Research Foundation said in an analysis published on Oct. 20 that the militants are trying to build a narrative “pole-opposite” to the Indian administration because the surrendered militants of LeT have appreciated the efforts of the Indian Army “in securing and normalizing” the situation in Kashmir.

Shivamurthy was referring to the case of a 19-year-old Pakistani militant arrested on the border by the Indian army late last month who went on record saying that LeT was sending “young boys to Kashmir for armed struggle by spreading misinformation about Kashmir.”

Shivamurthy said the terrorists and their mentors through the recent targeted killings are working on a “more complicated and dangerous” geopolitical plot.

“India in a three-front war—two from Pakistan and China, and the other two halves from the Kashmiri secessionists and a hostile Afghanistan,” said Shivamurthy adding that the 1980s outbreak of militancy in Kashmir is linked to Afghanistan’s Anti-Soviet Mujahideen era when Pakistan used various radical organizations to recruit fighters for the Kashmir cause.

By soft targeting, infiltration, and killing minorities, the terrorists are inviting the “wrath” of the Indian state, he said.

“This would destabilize the passive peace and maximize non-militant violence in Kashmir. Thus, attracting the attention and sympathy of extremist elements in Afghanistan and making it difficult for the Taliban to sustain their cautious policy,” said Shivamurthy adding that as Afghanistan enters a new great game, the terrorists and the Pakistani establishment will try their best to entrap India into a three-front war.

The Taliban on an earlier occasion said that Kashmir is a bilateral issue between India and Pakistan while on a later occasion its spokesperson once mentioned that it has the right to raise the cause of all Muslims, including of Kashmir.