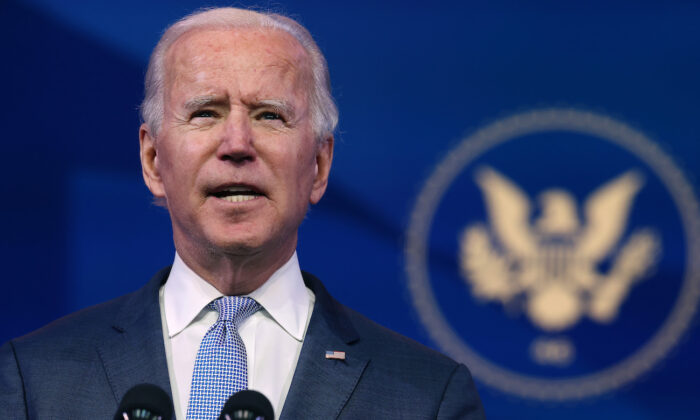 More People Would Get $1,400 Stimulus Checks Under Biden Plan

A COVID-19 stimulus plan proposed by President-elect Joe Biden includes $1,400 direct stimulus checks, which would supplement the $600 stimulus payments that were passed in Congress last year.

The direct payments are part of a broader $2 trillion package to address the ongoing CCP (Chinese Communist Party) virus lockdowns and restrictions.

Meanwhile, Biden’s proposal expands the eligibility of the $1,400 checks. One key group includes adults who can be claimed as dependents on others’ tax returns, including college students and elderly people who are being cared for by their children.

The CARES Act, passed in March 2020, did not provide stimulus payments to dependent children who are aged 17 and older. It provided $500 for each qualifying child as well as $1,200 per adult, while December’s stimulus provided $600 payments to adults and children.

The plan (pdf) also calls for expanding the eligibility to “all mixed-status households,” which means families where one person is an American citizen or green card holder, while others lack legal immigration status.

“President-elect Biden’s plan will also expand eligibility to adult dependents who have been left out of previous rounds of relief and all mixed-status households. And, his plan will ensure that the Treasury Department has the flexibility and resources it needs to deliver stimulus checks to the families that need them most, including the millions of families that still haven’t received the $1,200 checks they are entitled to under the CARES Act,” the plan states.

The proposition sparked backlash from some left-wing politicians, who claimed that Biden should provide $2,000 stimulus payments on top of the $600 payments that have already been doled out.

“I am on board by helping people that need help, people that really can’t make it, people who don’t have a job, they can’t put food on their table—I am in total support of helping them,” he said on CNN.

“Sending checks to people that basically already have a check and aren’t going to be able to spend that or are not going to spend it, usually are putting it in their savings account right now, that’s not who we are. We have done an awful lot of that—it’s time now to target where the money goes.”