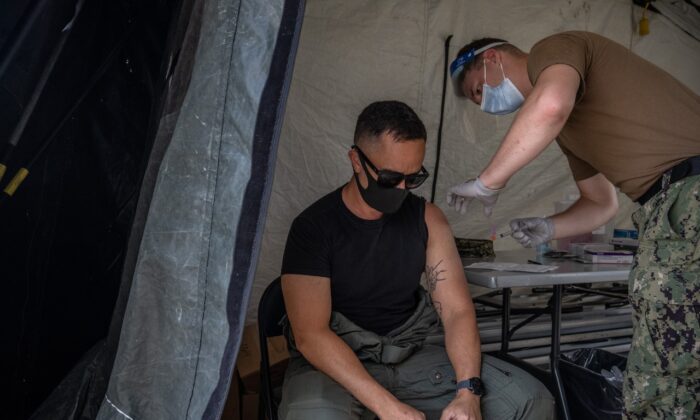 Injured active-duty service members have been subjected to abusive discharge practices by senior leadership, according to an advocacy group, calling it a scarcely documented trend that must be stopped.

The Epoch Times spoke to Nic Gray, CEO of Uniformed Services Justice & Advocacy Group (USJAG), whose mission is to “ensure injured, ill, or wounded active-duty service members are separated with benefits, honors, and their dignity intact.”

For the past two decades, since the start of the global war on terrorism, hundreds of thousands of soldiers have returned home injured.

“They’re suffering from traumatic brain injury, post-traumatic stress disorder, missing limbs, burns, and more,” Gray said. “Sadly, when they come back injured, the solution that the Department of Defense (DoD) commonly uses to treat their issues is to put them on a cocktail of medications.”

According to thousands of forensic investigations conducted by USJAG dating back to 2007, Gray said that “while injured service members should find themselves in medical board proceedings to be medically retired, they are instead taken out of the medical retirement process and moved in a chapter process to remove them from service more expediently.”

“The typical one-year-long process then becomes about a two-week process,” he said. “At the same time, these soldiers are being released from the military under less than fully honorable conditions,” which “strips them of the needed medical care and financial support owed to them and their families.”

Gray said this is the case because “injured service members are eating up scarce resources that could be allocated toward deployable soldiers, healthy soldiers.” Ultimately, that’s why the solution is to remove injured soldiers from medical retirement processes and “chapter them out in a matter of a couple of weeks.”

“They’re no longer the fiscal burden of the DoD,” he said. “They pass the buck and leave injured service members in the hands of communities across the country without appropriate health care to treat their injuries.”

For USJAG, it’s called “the valley of death,” because suicide is all too often the tragic result.

According to Gray, the DOD isn’t following the laws imposed upon them by Congress through the National Defense Authorization Act (NDAA). One example involves the COVID-19 vaccine mandate.

In a “unique example” of abusive discharge practices, USJAG recently became aware of an Army soldier, whose only infraction was his refusal to take the COVID-19 vaccine for fear of blood clotting because of documented, underlying health concerns. For this, the soldier was being flagged for the “commission of a serious offense” and was set to be less than fully honorably discharged.

Typically discharge for the commission of a serious offense involves acts such as domestic battery, murder, rape, terrorism, and drug use.

But Army command recently walked back on the discharge plans.

“I believe pressure from USJAG and [J.M.] Phelps has resulted in this soldier’s command making the right decision to drop the decision to discharge him in a punitive manner,” Gray said.

Instead, the soldier will be processed and discharged through the Integrated Disability Evaluation System process, a joint DoD and Veterans Affairs disability evaluation process. He’ll be given full medical retirement.

But this is only one case that has ended well.

“Vaccine refusal has become the new vehicle being used by the DoD to chapter people out of the military,” Gray said.

The military is attempting to less than fully honorably discharge its injured service members, stating that their refusal to get the jab is often considered the commission of a serious offense.

“Compounded by the egregious charge of the commission of a serious offense, they’re continuing to give injured service members the choice to take the vaccine and risk their health, or the other option to be less than fully honorably discharged and stripped of benefits, which not only affects the service member but also their families,” he said.

“This is not about being anti-vaccine. This is about the DoD intentionally not following the laws imposed upon them by Congress.”

By Gray’s estimation, USJAG has discovered only “the tip of the iceberg” of cases in which the military vaccine mandate has affected the lives of many injured service members.

“The only way to solve this problem is for Congress to pass legislation placing third-party oversight over the entire discharge process within the Department of Defense,” he said. “The DoD knows the end result of what they’re doing, and they just don’t care. Their actions are intentional, the results are devastating, and the corruption runs deep.

“The magnitude of malfeasance and medical malpractice by the DoD is beyond disturbing.”

If this were happening in the private sector, Gray said doctors and high-level executives would be jailed.

“But since the DoD effectively polices itself, nothing happens to these corrupt military doctors and commanders,” he said. “As a matter of fact, many of them receive promotions—and it’s sickening.

“This goes well beyond the vaccine mandate and into other disturbing areas of concern across all branches of the military. Accountability is coming.”

As a result of intelligence received from confidential informants inside the DoD, USJAG has been prompted to form an Advocacy Defense Fund dedicated to helping these types of cases relating to the vaccine mandate. His organization estimates that there are potentially thousands of them.

The nonprofit will release a film titled “Abandoned” in 2023 to spotlight what it describes as abusive discharge practices of the DoD.

Department officials didn’t respond to requests by The Epoch Times for comment.