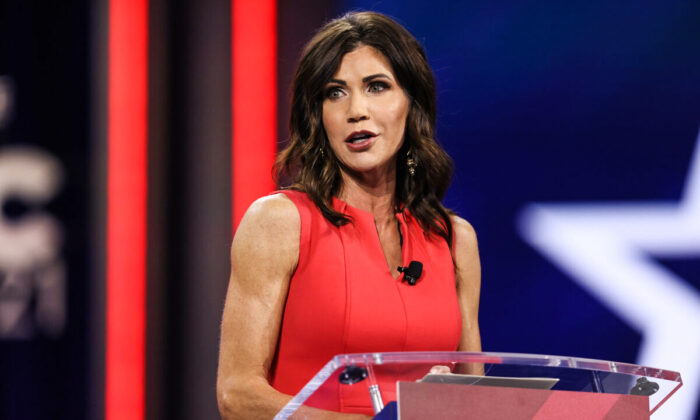 South Dakota’s Republican Gov. Kristi Noem has said that she would be “shocked” if asked to be Trump’s running mate in the 2024 elections.

“I think that there’s a lot of people out there who would like to be his running mate, so I’m focused on getting reelected,” Noem told CNN “State of the Union” anchor Dana Bash on Sunday. “I don’t operate in that hypothetical either … I would be shocked if he asked. And right now, I’m just so focused on South Dakota. We’re doing great things, and we’ve got a lot more to do the next four years.”

When asked whether Trump “bears any responsibility” for the riots at Capitol Hill on Jan. 6, 2021, Noem simply called Jan. 6 a “horrific day” in American history that she never wants to see happen again.

Noem has criticized Nikki Haley, the former United Nations ambassador, for blaming Trump for the events of Jan. 6. Rumors have circulated that Noem is preparing for a vice-presidential run in the 2024 election in case Trump runs again for president. Haley has already made it clear that she will not run against Trump.

In 2018 when Noem became the governor of South Dakota, she was the first woman to assume the post. In her recently published memoir, “Not My First Rodeo: Lessons from the Heartland,” Noem credits Trump’s 2016 presidential win for her decision to run for governor.

“I could return home now and do so confident that South Dakotans had a champion in the White House,” she writes in the book.

When he asked the attendees at the recent Faith and Freedom Coalition’s “Road to Majority” conference on June 17 whether anyone would want him to run for president, Trump was greeted with cheers.

While he is widely expected to make his third bid for the White House in the 2024 election, the former president has yet to officially make it known whether he plans to do so.

In March, during an American Freedom Tour, Trump appeared confident that Republicans would make significant gains in the coming election cycle.

In a poll conducted between June 17 and 22 by McLaughlin & Associates, respondents were asked who they were more likely to vote for between Trump and Biden if the general election for President were to be held today. Trump came in at the top spot with 49 percent support, with Biden at second garnering 44 percent support.