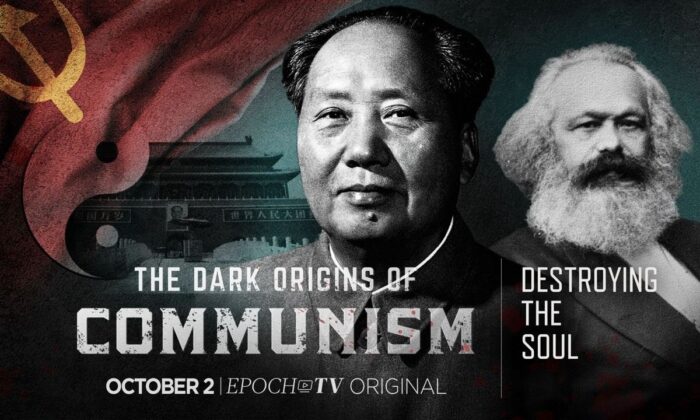 EpochTV Review: How Communists Create Division to Achieve Their Goals

In this final episode of an informative special series on communism, Joshua Philipp reviews the ideological principles it is founded on, and further examines how communist messaging must create division and strife in order to achieve its desired goal.

Under the system of dialectical materialism, everything in the universe amounts to “matter in motion,” meaning individual people are nothing more than a clump of physical cells. The souls, emotions, mental health, and wellbeing of human beings is not part of the communist equation.

Since a communist worldview believes that progress can only be attained through struggle, its goal is to fast-track “progress” by engineering struggle. The formula for doing so is quite simple. Marxist theoretician Georgi Valentinovich Plekhanov wrote in “Dialectic and Logic” in 1928 that the communist dialectic follows three laws: to identify, to contradict, and to “exclude the middle.”

First, they “identify” an issue in society. Then, they “contradict” it, by sharpening said issue into two antagonistic extremes. The chosen issue is then polarized and distributed to the media via state mouthpieces in a campaign designed to create division and cause struggle. In this campaign, the goal is to “exclude the middle,” meaning there is no tolerance for moderates. Vladimir Lenin, under the Soviet Union, categorized all people into only two groups: those who supported the communist revolution, and those who did not—and those who did not were marked for destruction.

Traditional dialectics aim to help people understand truths through the exchange of varying ideas, or by looking at both sides of an issue. The Karl Marx idea of dialectical materialism, which is at the heart of modern communism, does the opposite. It looks at various issues in society and identifies polar opposites, then adopts them as its own viewpoints, which are then pushed as being absolute and unquestionable.

Communists intentionally discount the often vast variety of moderate viewpoints, because they do not serve their narrative. Just as the moderate Girondins were the first to die in the French Revolution, or how moderate Democrats are shut out by Democratic Socialists of America, one thing is clear: communism favors the extremes.

Struggle is quintessential to communism. The result of this is to create a pervasively negative worldview. By constantly using “the Greater Good” against the people, over time, this narrative conditions society to subconsciously reject good and believe that the concept of goodness doesn’t exist, and is only a label used for power struggles. This makes sense to communists, since after all, that is how they view “The Greater Good.” People become accustomed to an environment where their fellow humans are selfish, evil, untrustworthy, and inherently have bad intentions. Everything is a struggle. This is the communist worldview.

Oleg Penkovsky, the highest ranking Soviet official to provide intelligence to the UK, said if the same set of information were handed to generals in America, Britain, and the Soviet Union:

“The American and the Englishman might possibly reach the same conclusion … but the Soviet general would arrive at conclusions which would be radically different from the other two.” Penkovsky said that “the logical process of his mind is totally unlike that of his Western counterparts, because he uses Marxist dialectics, whereas they will use some form of deductive reasoning.”

The thought process that communist systems instill in people is inverted. On the surface, the system claims to empower the people, so they can be happy. Instead, it disempowers the people, so they can be subjugated. This is why communism aggressively seeks to destroy spirituality. It must do this because spirituality itself poses a threat to communism. Even the very notion of a soul is threatening, because a soul carries an inner moral compass that is uniquely yours. If a person’s moral compass points in a different direction from where communism says, that is a threat.

Take for example, a profession that is meant to save lives, such as being a doctor. The state may order state doctors to kill, or to harvest organs from prisoners of conscience in labor camps, and transplant them to extend the lives of high net-worth individuals—in essence, sacrificing part of the population for what it calls the “good of the people.” To a communist, it would be justified to act in the interest of where money can be made or what most benefits the state. A moral person, however, would see this as abhorrent.

Marx held that struggle led to social evolution and claimed that his ideas were the end stage. His system thus tried to incite struggle to hasten this process—a process that required fomenting economic, social, and moral collapse. Marx’s theory of the five stages of civilization, mirrors Thomas Cole’s “The Course of Empires.” Cole believed the five stages to be; the “savage world,” the “pastoral,” the “consummate empire,” “destruction,” and “desolation.” Marx likewise, envisioned five stages, with communism being the end goal. Marx called the consummate empire, “capitalism;” the state of destruction, “socialism;” and desolation, “communism.”

As talked about extensively in the previous episodes, communism arises only after all morals, traditions, beliefs, institutions, hierarchy, and values have been destroyed. Philipp explains that Marx and Engels never intended socialism to be sustainable. Eventually, they believed, either the socialist dictatorship would collapse or its leaders would somehow renounce power, leading to their envisioned stage of communism.

This is why followers argue that “true communism” has never been achieved. So the communist machine operates in constant pursuit of an imagined future utopia by creating dystopia. This is seen in the sheer horror communism has brought on every area of the world it has touched. In the last 100 years, communism has claimed between 100 to 150 million lives in its pursuit of “progress.” It has created societies where power is held by a small group that enslaves entire nations, and where killing, reeducation-through-labor camps, censorship, and slavery become part of everyday life.

Communism convinces people that it intends to bring people happiness—but this happiness can be achieved only after a segment of society is either suppressed or eradicated. It provides a conditional happiness, at the expense of one’s morals. In either the Eastern or Western spiritual view of the world, the course of human life serves to temper the character of the soul. However in an atheistic, materialistic understanding of the world, only matter or progress exists.

Communism does not want people to have a soul. Rather, it wants them to follow orders. Collectively as a society, we need to recognize and reject communism for its true nature: a machine that destroys the soul. If humanity as a whole embraces spirituality as a facet of life, then we can naturally progress and naturally find happiness. This happiness won’t be in the artificial, struggle-induced way that communism tries to sell time and time again. Americans need to stop being duped by that old playbook.

This special series aims to educate people on the true nature of communism so together we can recognize it in the world around us. Watch the previous episodes to learn more, share this series with friends and family, and warn your communities and government leaders about the dangers of communism, so that we, the people, can finally be free and remain free forever.

“Crossroads” premiers every Tues, Thurs and Sun —exclusive on EpochTV.