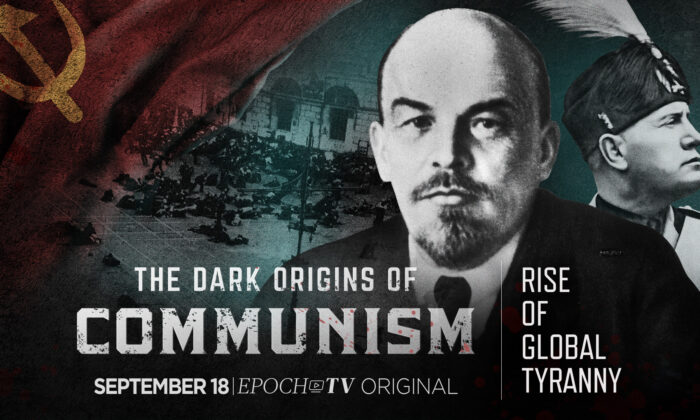 EpochTV Review: How Antifa and Socialist Ideologies Are Rooted in Communism

In the latest episode of a special documentary series by EpochTV, Joshua Philipp compares the ideologies of communism, fascism, Nazism, and anarchy—both in their inception and development.

In American politics today, there’s an idea of far-right versus far-left. However, this is often misrepresented. Both ends of the spectrum—with socialism usually on the far-left, and fascism and Nazism usually on the far-right—are actually all derived from different interpretations of communism. And all of these political ideologies share beliefs in state collectivism, planned economies, and class struggle.

The various interpretations of communism first came about after Karl Marx’s predictions about future revolutions proved to be untrue, sending communists of the time back to the drawing board. First, contrary to Marx’s prediction that the livelihood of workers would become worse under capitalism, their livelihoods actually improved. Next, when the communist revolution did happen, it was not in the so-called “late-stage capitalist” societies (which at the time were Britain and Germany), but instead they took place in Russia, which was still in an agrarian state, meaning their economy was based on crops and farmland.

Furthermore, instead of the class struggle being between the so-called “proletariat” and the “bourgeoisie,” the Bolshevik Revolution turned out to be between the military and intelligentsia and the feudal Russian Tsarist system of government. These inaccurate predictions also disproved Marx’s theories, causing communists to further reevaluate their belief system. The reassessment allowed for other variant ideologies to emerge, including, among others, fascism and Nazism.

Vladimir Lenin, a Russian revolutionary, took power in Russia after his role in inciting the October Revolution of 1917. Revolutionaries overthrew the Provisional Government, which had been set up after the February Revolution that had ousted the Tsar. They proclaimed that state power had passed into the hands of the Soviets and elected Lenin as chairman of the Council of People’s Commissars, which was now the new Soviet Government.

Once elected, Lenin’s policy “The Decree on Land” was approved, which decreed an abolition of private property and redistribution of the land estates among the peasants. His revolutionary regime suppressed political opposition, including other Marxists who opposed Lenin’s ideologies. Lenin believed that capitalism was the enemy of the worker and proposed the establishment of the “dictatorship of the proletariat”, that is direct rule by the armed peasants and workers, which in theory would dispose of capitalism and serve as the prelude to the establishment of a classless, communism society.

Meanwhile, after Lenin took power in Russia, Benito Mussolini began his takeover of Italy. As one of Europe’s most prominent socialists, Mussolini’s takeaway from World War I was that nationalism was more popular than calls for a worker’s revolution. He thus revised Marxism into fascism. “Fascio” is an Italian word that referred to a bundle of sticks reinforcing an ax handle, and was used to represent the idea of state collectivism.

Like Lenin, Mussolini believed that the worker was not by nature a revolutionary and had to be prodded to radical action by an intellectual elite. After Mussolini, Hitler appeared with the idea of “national socialism.” Hitler took advantage of the fact that the German people had been divided by new national borders established by the World War I armistice, and so he used race and identity politics to rally his followers. Just as Lenin targeted wealthy farmers and the CCP’s Mao Zedong targeted landlords to struggle against for their socialist movements, Hitler targeted a single group of people with state struggle—the Jews.

As author and filmmaker Dinesh D’Souza pointed out in his book, “The Big Lie: Exposing the Nazi Roots of the American Left,” the Nazi policies followed a 25-point program that closely mirrored the programs of today’s socialists. These included universal free health care and education, nationalization of large corporations and trusts, government control of banking and credit, the splitting of large landholdings into smaller units, and similar policies.

The conflict that later took place between the various systems during World War II was not a battle of opposite ideologies, but instead a fight over which interpretation of socialism would prevail. To say that Nazism, fascism, and Leninism have nothing to do with socialism or communism, is simply untrue. They simply lost their respective wars in the course of history, and became disowned.

According to “The Road to Serfdom” by F.A. Hayek, “The conflict between the fascist or national socialist [Nazi] and the older socialist parties must indeed very largely be regarded as the kind of conflict which is bound to arise between rival socialist factions.”

A present day example of rival socialists factions can be seen with Antifa simultaneously advocating for communism, as well as anarchy through the complete destruction of government. While these ideas may seem incompatible, historically, the anarchist and socialist movements often ran side-by-side. While socialists believed that a stage of government tyranny was needed to drive society into communism, the anarchists believed they could bypass the stage of socialist tyranny to create communism. William Godwin, who lived from 1756 to 1836, was one of the founding anarcho-communists. He held that through personal anarchy, a person could achieve what he called “voluntary communism.”

Under the idea of voluntary communism, anarchists achieve communism’s desolation by internally destroying their recognition of morals and hierarchy—thereby breaking the bonds of morality and order within themselves, rather than through external institutions. However, the anarchists also played strong roles in violent protests and revolutions throughout history to create socialist governments. The Antifa organization wasn’t always about targeting real “fascism,” as it claims. Rather, it was a strategy for a power grab.

“80 Years of Anti-Fascist Action” by Bernd Langer, is a booklet by a former member of the Autonome Antifa, which at one time was one of Germany’s largest Antifa organizations. According to Langer, the organization can be traced back to the “United Front” of the Soviet Union’s Communist International (Comintern) during the Third World Congress in Moscow in June and July 1921. At the Fourth World Congress of the Comintern in 1922, the organization sought to join together various communist and workers’ parties of Germany under a single ideological banner that it controlled.

The Soviets believed after Russia, communism would next take Germany, since Germany had the second-largest Communist Party in Europe, the KPD (Communist Party of Germany). In Germany, Adolf Hitler became head of the National Socialist German Workers’ Party (the Nazi Party) in 1921. On Aug. 23, 1923, the Politburo of the Communist Party of Russia held a secret meeting, and according to Langer, “all the important officials spoke out for an armed insurrection in Germany.”

The KPD launched a movement under the banner of United Front Action and branded its armed “anti-fascist” wing, under the name Antifaschistische Aktion, or “Antifascist Action,” where the Antifa organizations in other countries are rooted. Antifascist Action, began to attract some members who opposed the arrival of actual fascism in Germany, but who were unaware of the connection.

Communism was also unpopular with many people in Germany at the time. The violent revolutionary rhetoric scared people, and the middle class would never go for communism. Seeing this, the socialists of Germany understood they needed a new strategy. So the KPD, under its Antifacist Action wing, labeled anyone who opposed them as fascists. Thus, rival parties, especially the SPD or Social Democratic Party of Germany, were placed under the fascist label.

Ironically, the group the “anti-fascist” most heavily targeted were the social democrats.

The Antifascist Action eventually became so violent in its operations that it had the opposite effect. Appalled by the failure of the existing government to solve the crisis, they left the squabbling factions of the political right and instead joined the Nazis. With the help of Antifacist Action, the communists pushed the people into a Nazi system, still under the socialist ideas that were sweeping the world.

Meanwhile, the people didn’t know the KPD was actually a member of the Comintern, and within a few years, it became financially dependent on the Moscow headquarters resulting in leaders of the KPD falling under the command of the Soviet apparatus. Many KPD leaders would later become leaders in the communist German Democratic Republic, including its infamous Ministry for State Security, the Stasi, after World War II.

The original Antifa organizations were designed to be used as a weapon, wielded by politicians to move the people in their desired direction by fomenting chaos. Langer notes, the “fascist” labels merely served as “battle concepts” under a “political vocabulary” and that “anti-fascism is a strategy rather than an ideology.”

As author and economist Ludwig von Mises wrote in “Planned Chaos,” “It is important to realize that fascism and Nazism were socialist dictatorships.” Adding that “the philosophy of the Nazis, the German National Socialist Labour Party, is the purest and most consistent manifestation of the anti capitalistic and socialistic spirit of our age.”

He notes that the slogan the Nazis used to condense their economic philosophy was that “the commonweal [commonwealth] ranks above private profit,” which was an idea under the American New Deal and the Soviet system to manage the economy, and also ran under the banner of fighting inequality. “It implies that profit-seeking business harms the vital interests of the immense majority, and that it is the sacred duty of popular government to prevent the emergence of profits by public control of production and distribution.”

While modern day socialists want to divorce themselves from the failed institutions of Nazism and fascism, the truth is that they adopt many of the same interventionist policies, narratives on inequality, and underlying ideas. In order for socialism to assume power, it destabilizes existing social order with chaos and violence, intentionally propping up “crises” and class enemies to blame, so that people will be fed up enough to settle for a “new” system—which socialists will make sure is their system.