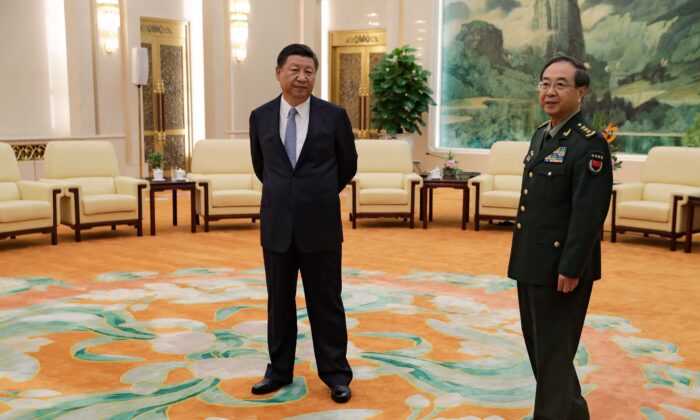 Chinese leader Xi Jinping (L) and General Fang Fenghui, chief of the general staff of the Chinese People's Liberation Army, wait to meet General Joseph Dunford, the chairman of the US joint chiefs of staff, at the Great Hall of the People in Beijing on August 17, 2017. (Andy Wong/AFP via Getty Images)
Military

Chinese leader Xi Jinping promoted five military officers to the rank of general earlier this month, bringing the total number of generals he has raised to 58.

Notably, Xi’s promotion of Wang Haijiang to the position of commander of the Western Theater Command mere months after Wang’s appointment as commander of the Xinjiang Uyghur Autonomous Region has raised questions regarding Xi’s trust of top military brass throughout the PLA.

Kevin McCauley, an independent China analyst who previously worked for the U.S. Department of Defense for 26 years, said that Xi has consistently used his political power to promote generals loyal to him.

“Since coming to power Xi has promoted officers loyal to him and used corruption charges against those he felt were not loyal,” McCauley told The Epoch Times. “Xi’s removal of officers, and promotions of those he trusts, cemented his control over the military and opened the way for the major reforms to the PLA he has pushed through.”

The Chinese leader has increasingly engaged in efforts to wipe out rivals within the CCP and PLA, and the purge does not appear to be ending. Just this month, Chinese state-owned media promoted a new “struggle” to encourage adherence to and the strengthening of Xi’s leadership over the nation.

Occupying a central place in these purges has been the leadership of Western Theater Command (WTC), a military region created in 2016 which oversees restive regions such as Xinjiang and Tibet, as well as important borders with Afghanistan, Bhutan, India, Kazakhstan, Kyrgyzstan, Mongolia, Myanmar, Nepal, Pakistan, Russia and Tajikistan.

Wang is the third general to be named commander of the WTC in just nine months.

Zhang Xudong was assigned to the post in December of 2020 and was replaced Xu Qiling in June, who was subsequently replaced by Wang in August.

Both Zhang and Xu disappeared after being replaced, exacerbating fears that Xi’s purge of military officers perceived as being insufficiently loyal was still in full swing.

McCauley said that the promotion of strictly loyal officers was a key method by which Xi maintained control of the PLA and CCP. Because of this, he believes that Wang will either toe the line or face a similar fate to his predecessors.

“Xi has clearly promoted officers he feels he can trust and has the obedience of the PLA,” McCauley said. “He has similarly strengthened his position within the CCP.”

“External and internal policies related to the WTC are determined within the Central Military Commission and Party,” McCauley said. “Wang will execute those policies or be removed.”

Frank Lehberger, a senior fellow at the India-based Usanas Foundation who spent twenty years in Tibet doing field research, agreed, saying that Xi was wholly focused on weeding out political enemies in the PLA.

“Xi is now fully concentrating on defeating internal enemies who could manage to block his lofty ambitions,” Lehberger told The Epoch Times.

Lehberger explained that Xi was doubling down on remaking the CCP and PLA in his own image, and that his restructuring of the military and purge of generals was largely aimed at overcoming his predecessor Hu Jintao’s reliance on the whims of a military largely shaped by Hu’s own predecessor, Jiang Zemin.

“In 2013, Xi was confronted with a PLA that was shaped by Jiang Zemin, who was State-President of China, CCP general secretary and Central Military Committee (CMC) chairman in one person from 1992 to 2002,” Lehberger said.

Lehberger said that the very structure of the new Theater Commands created in 2016 assisted Xi in this endeavor by breaking up the old organizational power bases of a military that still largely reveres the contributions of Jiang.

To this end, Lehberger believes that one key goal of Xi’s military reforms was actually to prevent anyone inside the PLA from gaining enough power to threaten him politically.

Xi’s accumulation of power does not end in China, however. His efforts to appoint generals personally loyal to him and to modernize the PLA into a modern expeditionary force capable of projecting CCP ambitions globally are now contributing to a security situation in Central Asia that could reshape the international order, analysts say.

“The CCP clearly wants to develop an expeditionary military capability and are developing the theoretical foundation, as well as military equipment to support a greater overseas military presence,” McCauley said.

“Right now, the CCP’s influence campaigns combined with the Belt and Road Initiative to gain influence appear to be succeeding in the Asia-Pacific region, Middle East, and Africa,” McCauley added.

Perhaps nowhere is this shifting of influence more evident than in Afghanistan, where the newly resurgent Taliban recently declared China to be its main partner.

Experts previously claimed that the CCP would effectively bribe the Taliban for access to lucrative infrastructure projects and mineral rights, but the security situation across the region of Afghanistan, Pakistan, and India presents a more complex problem than mere economic coercion might suggest.

Specifically, though it is expected that the CCP could leverage its economic clout with the Taliban to mitigate the development of new terrorist cells in Afghanistan, the Taliban may pursue the development of such cells in Pakistan or India. Such cells would prove fruitful for Islamists seeking to strike at India, though would ironically create a thorn in the side of the CCP.

“Beijing clearly wants to foster friendly relations with the Taliban and will offer economic development aid not only to gain access to Afghanistan’s mineral wealth, but also to influence the Taliban not to support terrorist groups within the PRC [People’s Republic of China],” McCauley said.

“Taliban support of insurgent groups in India could raise tensions in the region,” McCauley added. “These developments could lead to another crisis between Pakistan and India.”

“The emboldened and American-armed Taliban could now be tempted to strengthen fundamentalist currents in Pakistan and gain control over the government plus the army with its nuclear arsenal,” Lehberger said. “The Chinese have no way of preventing the Taliban from doing all that inside Pakistan.”

Thus, though the burgeoning relationship between the CCP, Pakistan, and Taliban has been described as a new “new axis of collaborators,” the reality of the situation is more precarious, and the return of Al-Qaeda fighters to Afghanistan may ultimately threaten Chinese ambitions in the region.

To this end, both McCauley and Lehberger believed that the possibility of unrest and terrorism in Central Asia remained a threat to the CCP, but that neither that threat nor the increased presence of U.S.-allied militaries in the Indo-Pacific was adequately deterring Xi from leveraging the CCP and PLA from carrying out his ambitions.

“The U.S. and its allies need to develop a coherent strategic program to counter CCP propaganda and influence campaigns, as well as the CCP’s use of economic development programs to expand its overseas influence,” McCauley said.

“The US and its allies should pay more attention to strengthen relations with Central Asian countries and weaken the PRC’s and Russia’s influence in this area,” he added.

Lehberger said, “The international community should simply not cooperate with China and scrutinize their intentions much more closely.”