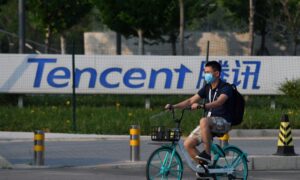 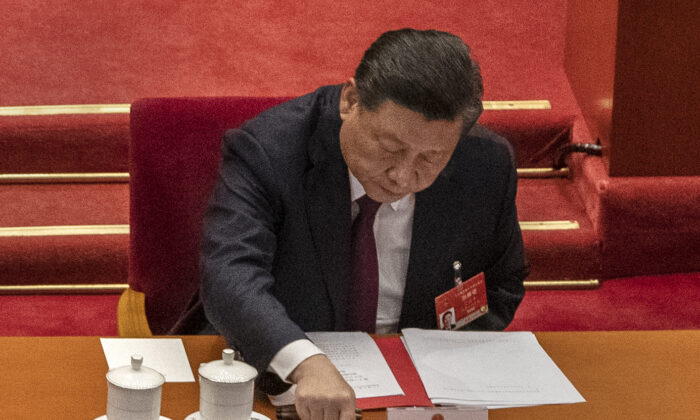 China's Leader Xi Jinping presses a button to vote in favor of a resolution to overhaul Hong Kong's electoral system at the Great Hall of the People in Beijing, on March 11, 2021. (Kevin Frayer/Getty Images)
Chinese Regime

The Chinese Communist Party’s (CCP) state-run media ran editorials one after another to advocate “struggle,” shortly after Chinese leader Xi Jinping required communist cadres to “stick to principles and dare to struggle.”

On Sept. 1, Xi attended the opening ceremony of the “Young and Middle-aged Cadres Training Course” at the Central Party School and delivered a speech—demanding that young cadres must be loyal and dare to fight.

Xi admitted that China is currently undergoing major changes unseen in a century, and the CCP is facing more and more risks and challenges. He told trainees not to expect an easy life, but instead get ready to struggle.

Then, on Sept 5, People’s Daily, the CCP’s major mouthpiece, published an editorial titled “Adhere to Principles and Dare to Struggle.” A little over 650 words long, the article used the word “struggle” 28 times. “A prime characteristic of the Chinese Communist Party is its daring for struggle. The Party bears the imprint of ‘struggle’ at birth and relies on ‘struggle’ to survive,” the article states. “It relied on ‘struggle’ to get to the present day, and it will depend on ‘struggle’ to seek a [bright] future.”

On the next day, the Central Commission for Discipline Inspection also published an online article using the same title, which claimed that the general direction of the CCP’s struggle is to “adhere to the leadership of the CCP” and “the socialist system.”

On the same day, a Chinese military outlet also published a commentary with less than 600 words, yet it mentioned “struggle” 25 times.

Around the same time, People’s Daily and Xinhua News Agency published articles praising how the CCP resisted the 1998 Yangtze River flood. The two articles not only have the same theme, but also are written in the same style. What is most noticeable is that neither article mentions Jiang Zemin, the leader of the CCP  at the time, but highly praises Xi’s flood prevention instructions when he visited Anhui Province in 2020.

On Aug. 6, 1998, when the flood peaked at the upper reaches of the Yangtze River and arrived at Yichang, Hubei Province, Jiang ordered local officials to “strictly guard against and protect the Yangtze River’s main dykes.” He vetoed the plan of “opening the floodgates and diverting floods” jointly proposed by the CCP’s State Council and the Hubei authorities. As a result, the flood collapsed dykes in several locations downstream, including a crucial location, causing tens of thousands of deaths and tens of billions of dollars in economic losses.

When the floods were raging, Jiang stuck to his order to strictly guard against flooding the main dykes, and kept dispatching additional troops and armed police, as well as manpower at local levels to maintain the integrity of the dykes. According to data from the water conservancy department, more than 70 million military personnel and migrant workers were mobilized along the Yangtze River alone, and approximately $1.5 billion in financial resources were invested in this endeavor.

After the flood, Jiang inspected the Jingjiang embankment in Hubei on Aug. 13, 1998, and bragged about how powerful the People’s Liberation Army was.

Notably, previous reports on the topic of the 1998 floods would praise Jiang Zemin. However, these recent articles did not mention Jiang. Instead, coverage was devoted to Xi’s speech on flood prevention and control during his visit to Anhui Province in 2020.

In 2022, the CCP will hold its 20th National Congress. Li Yanming, a U.S.-based current affairs commentator and China expert, told The Epoch Times that the articles touting “struggle” indicate that the CCP’s internal conflicts at the upper echelon have recently intensified. Xi has been purging internet giants, political and legal systems, financial systems, as well as celebrities in the entertainment industry—who have ties with Jiang’s faction—in the run up to the 20th National Congress.