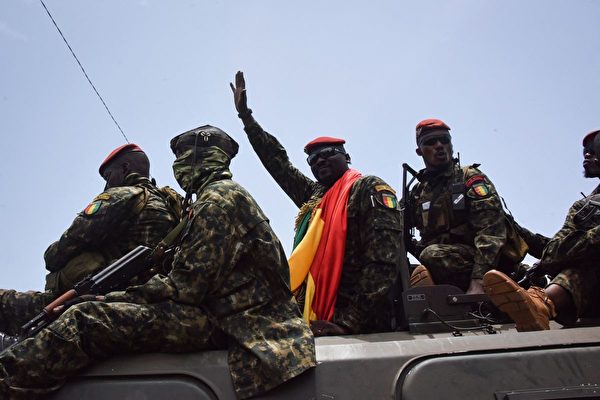 Members of the Armed Forces of Guinea drive through the central neighborhood of Kaloum in Conakry, Guinea, on Sept. 5, 2021. (Cellou Binani/AFP via Getty Images)
Chinese Regime

Why Beijing Opposes the Coup in Guinea

The West African country of Guinea went through a military coup on Sept. 5 when Guinea’s special forces overthrew and detained President Alpha Condé and took over the country’s government.

On the following day, a spokesman for the Chinese Communist Party (CCP)’s Foreign Ministry said, “China opposes a coup attempt to seize power.”

Some news commentators took note of the statement, considering that the CCP always claims that it doesn’t interfere in other countries’ internal affairs.

The Republic of Guinea was founded in 1958 after gaining independence from France. The 83-year-old Alpha Condé came to power 11 years ago after the nation’s first democratic election.

Soldiers from Guinea’s special forces poured into the capital of Conakry on Sept. 5 and engaged in several hours of gunfighting. They blocked main roads and detained Condé.

The coup was led by Colonel Mamady Doumbouya, the head of Guinea’s special forces and a former member of the French Foreign Legion. Doumbouya appeared in the country’s state media that day with a Guinean flag on his shoulder and announced the annulment of the constitution, the dissolution of the government, and the closure of borders until further notice.

Doumbouya also said the junta would work to establish a transitional government that would transfer power from “one person to the people of the nation.” He did not mention what the transition would entail, nor did he give a date for democratic elections.

As president, Condé had promised a stable democracy. However, once in power, he used violence to suppress opponents and failed to reduce poverty. Last year, Condé decided to run for a third term, which many considered illegal.

Although the coup was welcomed by many in Guinea, it panicked the country’s mining industry. Guinea has the world’s largest bauxite reserves, an ore used to produce aluminum. Although there are no signs of supply disruptions, the price of bauxite surged to a 10-year high on Sept. 6.

In an uncharacteristic turnabout, Beijing openly opposed the coup.

“China opposes the coup and calls for the immediate release of President Condé,” Wang Wenbin, spokesman for the CCP’s Foreign Ministry, told Bloomberg at a Sept. 6 press conference.

Duowei News, a pro-CCP overseas Chinese media outlet, said in an article on Sept. 7 that “Beijing, which has a history of non-interference in other countries’ internal affairs, has shown a rare hard-line stance on the Guinea issue.”

The article noted that when coups happened in Thailand in 2014, in Zimbabwe in 2017, and in Sudan in 2019, the CCP’s Foreign Ministry called for all parties to exercise restraint and step up dialogue and consultation, and insisted on its principle of “non-interference in other countries’ internal affairs.”

This indicates that the CCP’s resolute opposition to the coup in Guinea is very different from its previous statements of staying out of the affairs of other countries, according to the article.

Zhang Tianliang, an associate professor at Fei Tian College in New York, explained on his YouTube channel on Sept. 8 that Guinea has one-third of the world’s aluminum reserves and 15 times that of China. Aluminum ore is needed for many of China’s manufacturing industries, and China usually imports it from Australia and Guinea. However, the CCP’s relationship with Australia has become adversarial recently, so it imports a lot more aluminum ore from Guinea.

“So after the Guinea coup, for the first time, the CCP changed its usual statement,” Zhang said.

“In the past when there were coups in other countries, the CCP usually issued a standard answer, saying that it supported ‘the people’s choice’ of that country and insisted on non-interference in other countries’ internal affairs. This time, however, the CCP’s Foreign Ministry spokesman, Wang Wenbin, acted out of line with their normal response, saying they [the Chinese regime] are against the coup in Guinea,” Zhang said.

“It’s very rare for the CCP to suddenly, seriously, and clearly oppose the coup in Guinea. Isn’t this interference in other countries’ internal affairs? The mask of the CCP has come off,” Zhang said.

Zhang said there are two reasons for Beijing’s opposition to the Guinea coup.

One is that Guinea is an important country in the CCP’s Belt and Road Initiative, and Condé, the ousted president, was close to Beijing.

The second reason can be guessed from a photo on Condé’s Twitter account, where he is shown at a public event with Special Forces commander Colonel Mamady Doumbouya—the mastermind of the coup—holding an umbrella over him. The coup by Dumbouya, who was once the most trusted figure of Condé’s, may strike fear into the heart of Chinese leader Xi Jinping.

This analysis has circumstantial evidence that the CCP’s Western Theater Command has had four new commanders in a year. The first two commanders Zhang Xudong and Xu Qiling have disappeared after being replaced. “Doesn’t that mean there’s something wrong with the army? Xi Jinping faces huge opposition within the CCP. After Guinea’s coup, he is unlikely to have much faith in the leaders around him.”

In December 2020, Zhao Zongqi, the former commander of the Western Theater Command, retired and was replaced by Zhang Xudong. Six months later, in July 2021, Xu Qiing replaced Zhang Xudong as commander of the Western Theater Command. Xu was replaced by Wang Haijiang after only two months in office. All three were promoted to generals, but Zhang and Xu are still missing.

In an op-ed on Sept. 7, Epoch Times columnist Shen Zhou said that the change of three commanders in a row in the Western Theater Command at least reveals that the military generals are not 100 percent trusted by Xi Jinping, or that someone is still trying to stir up trouble. It is therefore worth watching whether Xi will be re-elected as he wishes.