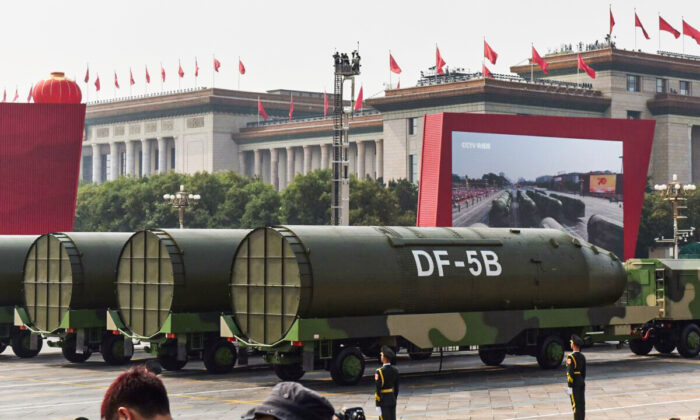 The US Is in an Arms Race With China, Whether It Wants to or Not: Expert

Such efforts will improve the regime’s capacity for nuclear coercion, according to defense and security experts.

“The Chinese have positioned themselves so that they can essentially execute any plausible nuclear strategy that they wish,” said Christopher Yeaw, associate executive director of strategic deterrence and nuclear programs at the National Strategic Research Institute.

The comments repeated sentiments made last year by Adm. Charles Richard, commander of U.S. strategic command. Richard warned that the CCP’s nuclear program was part of a “strategic breakout,” and that the CCP’s goals were much more expansive and aggressive than previously understood.

Yeaw’s comments came during a Hudson Institute webinar that explored China’s coercive missile strategy and the U.S. response to it. He said that, while the CCP’s rapidly growing nuclear arsenal was worrying, the more important issue at hand was its development of capabilities that could increase the risk of conflict or be used to coerce other nations.

Yeaw explained that the CCP’s efforts to increase nuclear warhead production and to develop a vast array of different types of nuclear-capable systems that could counter various U.S. capabilities represented a move away from China’s publicly-stated nuclear policy of minimal deterrence.

“All of this across the board is attempting to deliver a strategy,” Yeaw added. “These are capabilities that underwrite a strategy. The question is what is this nuclear strategy?”

Yeaw said that talk of China’s strategic nuclear forces too frequently concealed the threat of its growing theater nuclear forces.

Though smaller in overall destructive potential than their strategic counterparts, theater nuclear weapons are often thought to present an equal, if not, greater threat, as their relative control and battlefield role means that national leaders could be more prone to using them.

The reason for the CCP’s investment in such technologies was simple enough.

He explained that, since the disarmament efforts that followed the Cold War, the United States consistently refrained from pursuing theater-level, or tactical, nuclear weapons.

The presence of such weapons gives an enormous advantage in terms of coercive power.

Experts previously warned that the presence of such weapons would increase the likelihood that the CCP will engage in conflict both in Asia and globally.

This is because, whether or not the weapons are used, the mere threat of them may give the regime a real means of coercing the United States, its allies, and partners away from joining in any potential conflict.

“This is a nuclear strategy designed to underwrite their aggressive actions,” Yeaw said.

The US is Already in an Arms Race

Mark Lewis, executive director of the emerging technologies institute at the National Defense Industrial Association, expressed concern that the CCP was overtaking the United States militarily due to a failure to be proactive on the part of the American military.

“We took our foot off the gas, and [China] saw an opportunity,” Lewis said.

“It has given them a capability that, frankly, I believe right now is startling and is increasingly concerning.”

Lewis noted that the CCP’s technological development was outpacing that of the United States. He mentioned the regime’s test of a hypersonic weapon in July that flew around the world and deployed a missile before shooting back down to earth.

He said that the achievement was not only demonstrated the regime’s engineering capabilities, but its goals for future military strategy.

“The Chinese have clearly developed a level of technical prowess that is notable,” Lewis said. “But it also shows intent.”

Lewis highlighted the words of John Hyten, then-vice chair of the Joint Chiefs of Staff, who said in November that China’s hypersonic weapon appeared to be designed for nuclear first-use, affirming the idea that the regime was moving away from a deterrence-only nuclear strategy.

“To me, it signals that the Chinese are not only looking at capabilities that allow them to control the space in their immediate domain … they’re looking at global capabilities, and they’re using technologies to enhance that,” Lewis said.

He also said that the United States was not effectively deterring China from aggression, nor from nuclear buildup, and condemned the United States’ failure to build comparable technologies.

“We need to be looking across the board at those technologies and asking the question, frankly, what is going to scare China?” Lewis said. “If our idea of hypersonics is producing five missiles, doing a demonstration, and declaring success, that’s not going to scare anyone.”

“We need to be producing these technologies at scale,” Lewis said. “We can’t stop at ten hypersonic weapons or 100. We need to be in the thousands to actually have an impact.”

The comments reflected another interview of Hyten’s in October, wherein the general said that a “brutal” bureaucracy and risk-averse culture was consistently holding military development back.

To that end, Lewis said that American leadership needed to accept the reality that an arms race was afoot, and that the United States would lose if it did not commit to improving its ability to create and deploy new military technologies.

“I’ve had people say, ‘Oh, but we’re going to get into an arms race,’” Lewis said. “Guess what? We’re already in the race. The Chinese are running the race whether we choose to participate or not and that needs to be our mindset.”

“This is an existential threat and we need to view it in that way,” Lewis added.